The conclusion to my little superhero story. 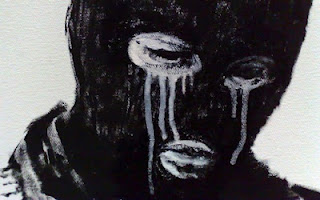 The three men run, they flee the house and run into a shed out back and frantically board up the door. The leader of the group is named Aaron, he's slightly older than the other two. They have a shotgun held by SCUMBAG and two big knives held by Aaron and the 3rd man. DIRTBAG.


AARON
Save those bullets. Do you understand me, they're our only chance. You don't pull that trigger unless you have it aimed a foot away from it's head.

DIRTBAG
We need to run before he gets up.


A primal roar is heard, it's a violent and guttural sound. Wholly inhuman. They're terrified.


SCUMBAG
WE HAVE TO RUN!

DIRTBAG
Shut up!
The men get quiet, they can hear the sounds of the monster smashing up the house room by room. It sounds angry.

They hear it getting closer and closer, it's outside the door. They can hear it stalking around the small shed, they can see it's shadow as it passes past the cracks in the walls where the lights from the house shine down on the dark shed. They can hear it's primal snorts of air up against the walls of the shed, a guttural rumbling in it's gut. Aaron turns to SCUMBAG who is shaking with the shotgun in his hands.

AARON
Don't miss.
The back wall explodes apart, it smashes through with ease, Aaron charges it with his knife held above is head, the knife comes down in the creature's neck. I has no effect, it grabs his arm and obliterates it. Aaron twist around and screams, he's facing the two horrified men. Blood gushes from his arm. The beast grabs his head from behind and pulls down on it like a pez dispenser, it snaps right off and rolls on the ground. The beast steps inside.

It's the man in the tattered mask, the area's where his skin is exposed looks grey and pale, dead. He's something between a zombie and a vampire, his eyes are yellow and expressionless. His movements are animalistic.

Scumbag screams, Dirtbag runs. Scumbag pulls his gun and shoots, nothing stops it. Scumbag is pounced upon and torn apart.

Dirtbag is running as hard as he can, the beast can be heard closing in behind him. Dirtbag screams, Cockroach runs alongside him and strikes him down. Dirtbag goes rolling along the hard pavement of the road, his knife skipping alongside him, sparking as it clashes with the road.

Dirtbag is hurt, he reaches for the knife but the beast that was Cockroach picks it up. Dirtbag tries to scamper away but he's stomped on. The beast bares down on him and holds the knife up, intending to strike down on Dirtbag's head with the large knife.

As Dirtbag winces the beast halts, there's the first glimmer of cognitive thought to his movements. He shakes his head, like someone trying to shake out the cobwebs and regain sobriety. His pale yellow eye behind the tattered black mask give way to his human blue eyes.

He's back. Cockroach is back and the beast is gone. He looks up to see himself holding a knife, he looks down to see Dirtbag cowering.

COCKROACH
Did you kill a blonde girl?

DIRTBAG
I am SORRY!

COCKROACH
I don't believe you.
'THUNK'. The sound of Dirtbag's head being split open with a knife. 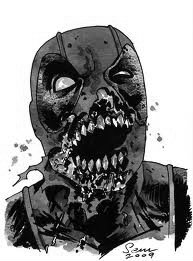 Oh wow. That was violent. HAPPY THANKSGIVING.
Posted by Unknown at 2:59 PM