F'n Sunday nights, it's pretty much impossible to enjoy them. I know that in about 2 hours I'll have to go to bed and when I wake up my work week resets. Dammit. A big reason that screen writing and filming appeal to me so much is that if I can ever make money off of it; if it can ever become a day-to-day job I feel like it would be a permanent cure for a disease called 'the Mondays'. It would be so much fun, I was watching an episode of Its Always Sunny in Philidelphia, it was the one where Charlie throws Denis in front of a car and he gets his and goes flying. That was their job for that day, to practice pretending to get hit by a car over and over. I process documents.


Anyway here's my page. It's just a little bit of dialogue showing how Rooney has started to get on Randall's nerves with his overbearing protectiveness. The zombie attack is juuuuust about ready to explode. 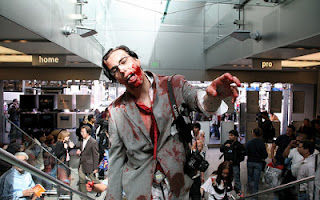 Rooney, Randall and Ervin are in the hall .

ERVIN
Rooney what's up with you?

ROONEY
Nothing's up...just thought you might want some help.

RANDALL
With a zombie inspection? Y'know you've been watching over my back a lot lately and I want to know why.

ROONEY
Watching over you?

ERVIN
I can see it, you did lock him in a closet last night when we were fighting that mummy.

RANDALL
A MUMMY Rooney, they're the most fragile things in the world.

ROONEY
Some of them have special powers

RANDALL
Rooney your the most incompetent person in the department, I should be the one breathing down your neck. Only PHARAOHS have powers!

ERVIN
Look I have to get back, you guys need to get that zombie out of here.

They walk back into class, Rooney and Randall begin to inspect the zombie, first getting her subdued and then starting the inspection with her hands. In the back the Creepy Recruit looks a little freaked out, no one notices the slight hue of red around his mouth. His lip is bleeding.

RANDALL
No fresh skin underneath the fingernails, that's good. She didn't get a hold of anyone. 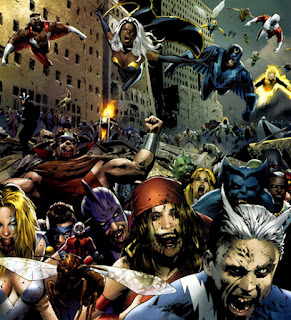 Well, not Marvel Zombies but yeah, the zombie outbreak starts next entry.

Oh man how good was Marvel Zombies, oh and you know what else was WAY better than you'd expect? Wolverine vs the Marvel Universe. 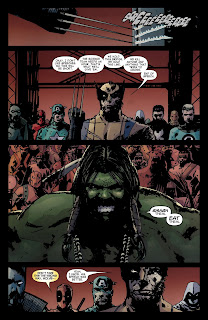