TREATMENT - I AM NOT A WEIRDO - A thriller by Thomas Holler

I AM NOT A WEIRDO
A thriller by Thomas Holler

That moment in a relationship where the one you love starts to show signs of violent dementia.

Douglas and Abigail are a young couple starting their life together, Douglas has agreed to move into Abigail's beautiful, ancestral home in the country. Helping them move on their happy day are Douglas' best friend Grant, Abby's favorite co-worker Bryce and her father Richard who's never liked Douglas. Douglas is big and sarcastic and not afraid to speak his mind, Abby is cute and quirky. All things considered, they're a great match. For the first few weeks things couldn't be better but then one morning Abigail finds a note on the counter, it's a collection of violent ramblings, it scares her. Over the coming days she finds other creepy things that make her question Douglas but in his typical Douglas way he convinces Abby there are logical explanations for everything. Both of them badly want this relationship to work, they decide not to dwell on these little mysteries anymore. To ease her tension Douglas takes his woman for a romantic dinner on the pier and they fall in love all over again.

The next morning it all comes to an end. Waking up alone, Douglas heads out to the hall to find Abigail standing outside of her guestroom with a horrified expression on her face. She's screaming at him, accusing him of doing something disgusting. He has no idea what she's talking about. When Douglas sees what's inside the guestroom his face goes white. Demented writing covers the walls. Abigail's dolls which once decorated the room have been mutilated and twisted into violent sexual positions. It's dark. Abigail is scared of Douglas, Douglas thinks Abigail lost her mind. They fight, Abigail throws him out.

Douglas races to Grant's house, with his help they plan on trying to convince her to see a doctor. They never get the chance, as soon as they turn onto the lonely road leading to her house their car is hit from behind and spun out. When they awake they're met with Richard's shotgun and an ultimatum. Leave or be killed. Douglas leaves, but not without a fight. The next morning Douglas is arrested when he attempts to get to Abby, he's told that during the night someone tried to kill her in her sleep and he's the main suspect. Without evidence, he's eventually released. Broken and at the end of his rope Douglas still can't seem to let Abby go, in a effort to watch over her he takes to stalking her. Meanwhile Abigail is trying to get over Douglas with the help of her father and Bryce, they're the only ones who make her feel safe with her psycho ex-boyfriend on the loose.

One night while he's watching her house Douglas sees a mysterious figure sneaking in through Abigail's side window. Douglas follows the figure inside the house and chases it away but is caught by Abby and arrested on the spot. Douglas, now sure that Abby isn't crazy; turns his suspicions towards Bryce, who's been getting cozy with Abigail. Douglas soon confronts Bryce, accusing him of destroying everything he had and taking Abby from him. Bryce responds by pulling a gun on Douglas and telling him to stay away from Abigail. Later that night Douglas finds Bryce bleeding to death from a stab wound on Abigail's porch. Douglas races Bryce to the hospital and saves his life, there Bryce tells him that there's someone inside the house.

In the final act Douglas races back to Abigail's house to warn her about the stranger in the basement but as soon as Abby sees Douglas she slams the door and locks herself inside with the attacker. Meanwhile Douglas tries frantically to break down the door until he's spotted by Richard and his shotgun who thinks he's there to kill Abigail. Douglas has to battle his way through Richard to save Abigail who's also fighting for her life inside the house against a rabid, basement dwelling psychopath.

If you'd like to read my script then email me at apescripts@gmail.com 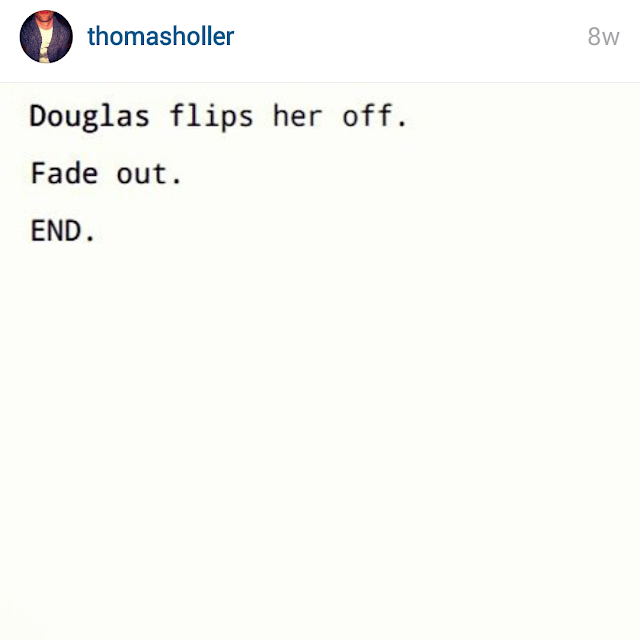 Posted by Unknown at 1:23 PM No comments:

I FINISHED MY MOVIE SCRIPT

Man, I haven't done this in a while. Feels weird, I kind of forget the layout...anyway, back to blogging.

The short explanation for why I haven't posted in so long is that after I converted everything I'd written so far in to a script program, I found that I couldn't copy and paste my work here without all these formatting errors and that was annoying so I decided not to bother.

I kept writing though. I will say this, writing a movie is very hard. If you're someone out there who has decided to write their first script then expect to struggle. Expect to feel like a bum. Writing isn't typing, writing is sitting on your couch staring at a wall and listening to music until an idea hits you. It feels unproductive and all your instincts will tell you to quit and stop wasting your time.

It's not fun, its work. If you're still driven to see your idea through then just keep at it. Remember that even if you're just writing a paragraph everyday then you're slowing getting it finished. Just keep coming back to it, make it a habit, hold yourself accountable. Grind it out and you WILL finish, and when you do it feels pretty cool.

So my script is finished. 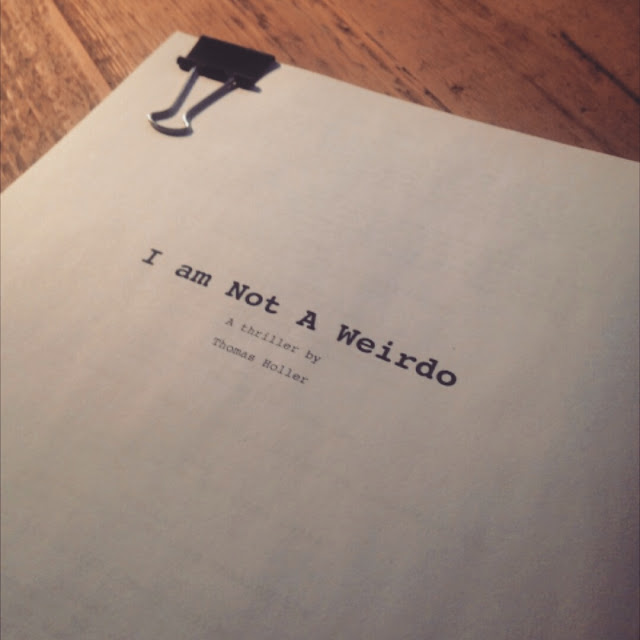 Posted by Unknown at 9:58 PM No comments: