This footage was takes from the first EVER time that we were able to get a probe far enough to see Jupiter. By a fluke, NASA scientists realized that just as they were getting ready to chose a target for their Voyager satellite; they stumbled upon the fact that Jupiter, Saturn, Uranus and Neptune were all going to converge on an orbit that made it possible to visit all four with comparitively little effort.

This was our first view of the gas giant:

and this was our first view of Jupiter, imagine how haunting it must have been to see this MASSIVE planet come out of the darkness for the first time. Swirling with life:


And with that, here's a re-post of a very old story I wrote about two people contemplating outer space on a walk home from the bar.

We watch as two men leave a bar during the last hours of the night, the two look slightly worn. The two men are in total contrast; Man #1 seems wide eyed and awake, Man #2 looks like he is completely ready for bed and can barley keep his eyes open. As they begin their walk away from the bar they take a moment, an extended hesitation as this is something they clearly do not want to do. They begin their walk through the parking lot.

Man #2
(Slightly more emphatic)
I don’t want to go to work. If we go home right now we can get about 5 hours sleep before we have to be up. You just crash at my place.

Man#1
(Kicks a can on the ground)
Sarah won’t get mad?

The two men pass the bar and head toward the park

Scene 2
EXT- LOCAL PARK
The two men cut the park on the way home, the mood is still gloomy. Its late they are tired and neither is excited about seeing another work week begin.

Man #1
Are you glad you moved in with Sarah?

Man #2
Well, it’s not like I had a choice, I couldn’t afford to move out on my own and no one else wanted to move in with me.

Man #2
No one. Sarah would have gotten pissed if I moved out with anyone other than her; she takes that kind of thing to mean that I don’t want to be with her.

As he begins his sentence the sky lights up a shade of purple and both men are startled.

Man #2
Holy.
They both freeze there for a moment looking upward

Man #2
That had to have been a comet or something

Man #1
Meteorite
Again they fall silent while looking toward the sky, after a few moments they begin to walk again. Neither man can look away from the sky.

Man #1
I know, when I was I kid I was really into that stuff. Space and stars and other planets, I used to just stare at the sky at night.

Man #2
Same. I had friends that knew a lot about it, I remember laying on the grass a lot with them looking at outer space.

Scene 3
EXT – A PARK BENCH OUTSIDE A LOCAL SCHOOL
The two men are sitting on a park bench outside of a school, both men are now fixated on the sky, both men have the curious smile of two children lost in imagination. The shot moves from the in-front view to behind them looking upward and sharing the view of the stars that both men are enjoying.
Man #1 breaks the silence

Man #1
Y’know how you take the stars for granted?

Both men feel like they reached an epiphany and everything that follows is said with a tremendous sense of both discovery and importance.

Man #1
We never really look at the stars with everything we know. Its like we know all about them scientifically but we never think about that knowledge and look at them at the same time.

Man #2
(Looks at him quizzically)

Man #1
I am going to go into a rant here....just be quiet 'cause it doesn’t work otherwise.
Ok
(Takes a second to compose his thoughts)
I mean...you remember “Light Brite”, that thing where it was this giant light; then you got special black paper and put it over the light so that when you poked the colored pegs through; the light would go into the pegs and they would light up?
(He doesn’t wait for any answer)

Man #1
No one ever, ever got more paper when they ran out so they just reused the old ones. Then when they put the paper with all these little holes on the “Lite Brite”; you would see all these pin pricks of light poke through the paper. That’s kind of like how people look at the stars, like they are just these little pricks of light in the sky. AND NO (he gets confrontational, as though he is defending himself to no one) I AM NOT SAYING that people think the sky has holes in it or anything like that. I am just saying. People don’t really think much about those lights.
Man #1 breaks into a confident smile

Man#1
My point is it’s amazing to think; when you really do think, how impressive that little light is. Just in terms of distance; that thing is hundreds of billions of miles away. That is totally inconceivable to people, all we base distance on is distances we can travel on earth. That’s like walking the whole earth a million times, it’s like we KNOW that’s a lot but we can’t really conceive of what that would be like. If you walked as far as you could toward it…
With that it appears as if Man #2 begins to walk toward the star, climbing upward as though there were and invisible staircase. He keeps walking until he is in space and keeps walking toward his target getting further and further out of distance.
… then when you died; you had a kid that walked as far as HE could toward it; and so on…
This time we see Man #2 in outer space he has made some distance between himself and the earth but is still relatively nowhere, he is an old man now. When he collapses and dies, a man looking relatively similar to Man #2 begins his quest; taking up where his father left off. Through a series of dissolves indicating the passage of time we go through many generations.
… it would take a million generations of you to even get close…
In space now we see a man wearing futuristic clothing indicating that hundreds of years have passed, when the camera pulls out we see that he is still a long ways off from reaching that star. 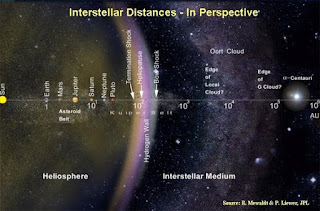 Reality snaps back, the focus is back on the bench.
Man #1
IT LOOKS LIKE ITS RIGHT THERE. Even the moon is so far away; like... (Makes a gesture, a hand wave saying "forget about it"). Plus since light takes so long to travel to earth; what we are looking at is all in the past. This is ALL one big rerun and in reality the sky up there looks nothing like this.
We step out of reality again as when Man #1 reaches to the sky he grips stars and moves them all over the sky to make his point, occasionally tossing a few away.
…some stars are gone over here some new ones are over there, it’s something else entirely AND we won’t even know for another hundred years or so…
Back to reality

Man #1
What’s really crazy is how BIG that little thing is, those stars are way bigger than the sun. If we were to drift close to one, ignoring the fact we'd all be fried; as soon as we got within a million miles one star would fill up out whole sky and then some. It’s like comparing the size of a rock to a lake, it’s so messed.
A black hole floats into view
One black hole or one star explosion happens a long way ways and we are toast; there really is NOTHING we could do. There would never be any record of any human existence ever.
The world is quickly sucked into oblivion; we are left in complete blackness.

Man #2
(Through the blackness)
Do you believe in aliens?
Back to reality

Man #2
(Far too serious)
I am just saying that a lot of people think that we are being documented by other creatures.
(Looks hard at Man #1 and nods)
So at least if they were; than some one would know about us. I was watching this show the other day where they mentioned that there is a facility that sends out radio frequency signals throughout space and try and get one back from some other life form. One day they got one back…

Man #2
Yeah.
(Another deep serious stare, head nodding)
It was a signal for about 3 minutes, after they confirmed it wasn’t their own bouncing off some asteroid and started trying to find it, the signal stopped. That was in nineteen-seventy… something. It’s the only success they ever had but the government STILL has them in business, that PROVES that the signal was real.
They both seem shocked, and maybe a little frightened. They look back toward the sky, this time as though they had suddenly become aware of some horrible truth.

Man #2
On the show they said that it’s most likely that they aren’t aliens but travelers from the future. But if you think about that, of all times that they could be visiting why now? Nothing has really happened in our time. If you think about it they have to know that something big is going to happen soon.
Hey honestly, if I had to guess I would say that they know that some huge catastrophe is coming that they have to stop.

With that both men stand up and walk, they head across the street neither one looking away from the sky. They navigate the lawn avoiding lawn ornaments, trees and gardens without ever looking down. When they get to the front porch they open the door, take one last look and head inside.