I HAVE A RECURRING DAYDREAM - 2

I am continuing this story, check out my last entry if you're interested in catching up.

The man takes a moment, the room is quiet and very dark. He gets up off the floor onto his knees, he turns towards the door and stops. Staring back at him is the barrel end of a dirty shotgun, it's held by a scumbag in a white t-shirt with blood stains all over it. Her blood. He speaks. 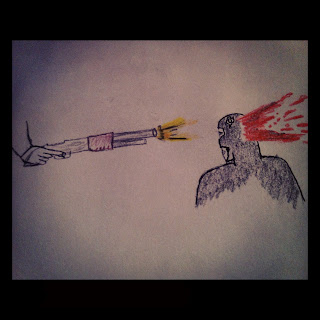 The scumbag pulls the trigger, the bullet goes through the man's mouth and explodes out the back of his head. He slumps backwards, his eyes seem impossibly focused and locked on his killer's as he falls backwards. The scumbag is startled, he runs out to the backyard where 2 other men are loading up their truck with stolen items, one of them is trying to wash the blood off of his face. Beside him is a large knife.

The men drop what they're doing in a panic and rush to their weapons. There's confusion.

SCUMBAG 1
He's inside with the girl, I don't know who he was. I shot him in the head, he's dead.

The night is dark, the house is almost pitch black. One can barely make out the figures as they cautiously stalk the house towards the room where the mysterious stranger had been murdered. The soft light of the room with the two bodies illuminates the group as they inch closer, they see the body of the girl first and don't even react. Towards the far wall they see the slumped body of someone else, dressed all in black.

His upright feet obscure their viewpoint, they move closer...there's movement. They all ready their weapons and step forward, the scumbag with the shotgun is forced to take point. As he gets closer he see's clearly that the man on the floor is breathing, he's breathing very fast. There's a growling sound, something primal and inhuman. He spasms, his growling gets ferocious. He's waking up.

The two man in back's faces have gone white. They recognize the mask, they know exactly who this is. They are in BIG trouble.
"IT'S COCKROACH, RUN!!!!!!!"