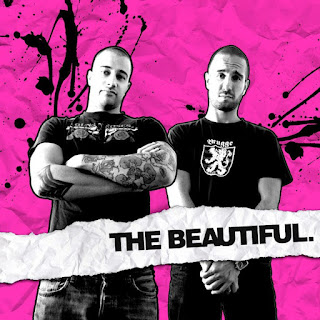 I am going to write a short story involving two characters named Tom and Chip and a little show called the Beautiful.

See...after I graduated from college for Television Broadcasting one of the first projects I got involved with was a pilot based on myself and an friend of mine. I got together with a film crew and we cranked out a fully produced pilot for the show which actually got us into a meeting with a fairly well known television station. After pitching this show to them they decided to meet with us and just encouraged us to keep working and impress upon us that we were on the right track.

We never shot a follow up to this show in particular and the character have been sitting on a shelf ever since. The other day I decided to go back and re-watch the pilot, it was the first time in over a year since I'd been able to bring myself to. My first impressions of it when I saw it years ago were mostly negative, we were unprepared acting wise and if we'd rehearsed more we could have massaged a little more comedy out of the script. The script itself was another problem, too much monologuing. I remember being on set and feeling like as I spoke the words I couldn't make it feel natural. It's something I am more conscious of when I write now. I try to make dialogue feel more real, it's easier to read for the actors. There are also several scenes where NOTHING happens, it just feels dragged out.

Anyway, like I said that was my first impression.

Yesterday though when I re-watched it I found a lot more to like about it, sure it wasn't perfect but it wasn't going to be. We'd never filmed before, we'd never really acted and we had almost no budget. I specifically remember not really knowing all of my lines, we really didn't have much rehearsal/reading time. All things considered I am actually now pretty proud of it now. I want to try to write a short film starring those two characters and this time try to really nail their voices and give them more to do than sit on a damn couch.

Oh and Shay Mitchell from Pretty Little Liars is in it. She was great, we had her drive us around, stand outside in the freezing cold, dance around to music (which we didn't even use) and then come back for re-shoots and never once was she anything but cool about it all. She deserves all of her success, she was awesome.

Here it is, I am the goofy looking one with the hair that I don't have anymore and kind of miss.