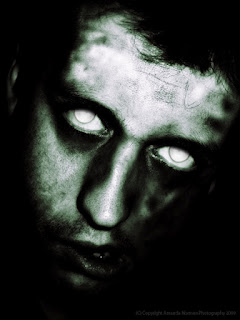 So I hated where my story was going, there was so much of it I liked but I wrote myself into a corner with how I had it all blocked out. I rearranged some things, changed the order in which they happen and gave myself a fresh point from which to start building an ending.

This is something I can come back to and finish up because I've given myself a lot more room to craft a story out of where I am headed. I don't know that I'll come back to this right away, I am anxious to get started on something new and actually more urgent.

So I am going to file this one away, to be completed later. 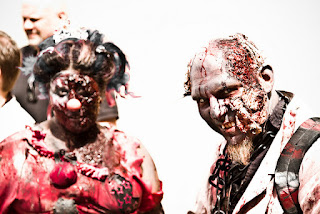 INT- A Classroom in the basement of DOPE headquarters.

ERVIN
There is nothing more dangerous than a zombie

The camera pans back to reveal about 20 recruits in the class sitting on the floor.

ERVIN
Never mind all this talk about zombies only being dangerous in large numbers, that's not true. Fighting one single zombie is like fighting an angry gorilla. They come at you with everything they have and never tire. They have no fear and never hold back.

There's a knock at the door.

ERVIN
And now you're about to meet one. Aside from being our classroom for today this is also the area where we conduct our zombie inspections. This is where we do a thorough examination of all new zombies to determine their identities so that we can contact families and hopefully bring them closure. Those that don't have families and those who we can't identify are buried in a government funded graveyard.

A female zombie comes bursting through the door, the recruits all jump back. She goes to run at them but is jolted to a stop by the collar around her neck. She has two handlers with her, they have a fight getting her chained to the wall safely. They're scared of her.
HANDLER 1
You need to WATCH this one. She's out of control, she almost got my partner here. Didn't she Marty?

He turns to his partner (Marty), Marty is hunched over and holding his side, there is a hint of blood on his hand.

They limp out of the room, Marty is in obvious pain and is holding his side as though to conceal it, there's blood on his hands. The zombie on the wall thrashes about.

INT – the Offices of DOPE

Rooney is looking for Randal and asks a coworker assigned to scheduling and assignments.

ROONEY
Elvis. Have you seen Randal he was supposed to come get me to help him with a zombie inspection?

ELVIS
Oh, he already left. Sorry, I didn't see your name on the form or I would have got you.

ROONEY
Elvis. Always get me when he's called.

ELVIS
Of course, I can try to do that from now on but...the zombie is already in restraints; I really don't think you need to worry.

ROONEY
Don't worry? Do you even know what a zombie is exactly?

RECRUIT
Sir, what exactly is a zombie?

ERVIN
Well that's only partially right. The zombie you're picturing isn't your attacker, that's just his vehicle. The zombie is actually just a tiny, microscopic parasite. It makes it's way to the brain once it's in the bloodstream, from there it completely takes over. It's control of it's subject is dominant, they aren't somewhere behind their own eyes witnessing in horror their own action. They're gone completely, once the parasite enters the brain there's absolutely no brainwave activity...

ROONEY
...outside of one single thought.

Elvis is transfixed
ELVIS
What's that?

ROONEY
To bite you. 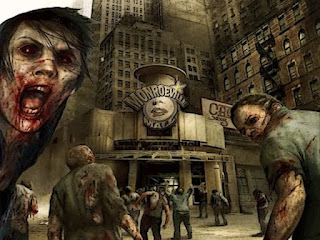 ERVIN
To tear you open with their teeth. See they reproduce through secretions in the saliva, once it's in your bloodstream they've effectively passed on their seeds. Reproduction, it's the only thing parasites live to do and they attack that task with all the ferocity of an athlete playing in game 7 of a championship series. Even if a host body is killed a parasite can keep the muscles active for up to 9 months. Even after receiving incredible trauma like being cut in half; the zombie can still keep trying to bite you. That's why the only course of action in some cases is the removal of the head or the destruction of the brain.

There's a knock on the door, Randal enters.

Randal has a clip board and some medical instruments with him

RANDAL
Hey Ervin, I heard we have an unidentified zombie here.

ERVIN
That's right Randal; tell my recruits how we go about identifying our zombies.

RANDAL
Well we've found that the best method of identifying who these people were was to set up a database of all the zombies we find and make it accessible to everyone in the public that's looking for one of their loved ones. We post descriptions and pictures of the zombies we find and we try to be as detailed as possible for anyone looking. So what I am going to do here is look for any identifying marks like a tattoo or birthmark or a scar, anything that makes identification a little easier.

Randal goes to begin his identification but is stopped by Ervin

RANDAL
I don't need him

RANDAL
Then you help me.

ERVIN
Absolutely not, not with a classroom of recruits here. Wait for your backup.

RANDAL
He's been watching over every little thing I do lately, if you want him; go get him. I am starting this inspection.

He hears an almost inhuman hiss. 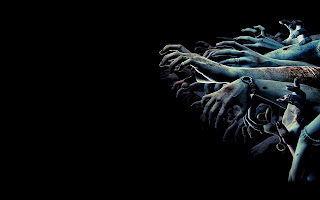 INT - Classroom
Back at the classroom Ervin and Randal are still bickering over his not having his partner with him.
ERVIN
That's it. Mr. Gomez, do you know who Rooney Rodman is? He's in inspections and removals.
Mr. Gomez
Yes, I saw him getting yelled at by Mr. Dickmyer earlier.
ERVIN
Yeah that's him. I need you to go find him for me.
Mr. Gomez
Ok.
The young recruit Mr Gomez rushes up to the door and opens it. Like a great white shark bursting through the waves to catch a seal the zombie that was Marty's partner bursts through the door and onto him. He never has a chance, his neck is ripped apart by the zombie's teeth. Ervin screams for the rest of the recruits to get back. Randal is startled off his chair and falls into the female zombies. Her restrains slip and she bursts forward after the recruits. She's loose but she drags chains behind her now.
Randal does what he can and quickly grabs hold of her chains, stopping her just short of tearing into one of the recruits.
Ervin runs to the intercom on the wall and screams, his voice is cracking and stricken with panic.

ERVIN
LOCK DOWN THIS BASEMENT NOW! WE HAVE A ZOMBIE OUTBREAK! 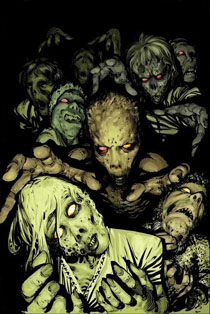 The response to Ervin's plea is immediate, an alarm sounds and the main doors are locked down.
The recruits are terrified and are pressed up as close against the wall as their bodies will allow, a gnashing female zombie is just inches from getting a hold of one of them. She's single minded in her focus, not turning her attention to the only reason she can't get to the terrified recruits. Randal is holding onto the chain attached to the collar on her neck, he's struggling mightily.
Ervin springs onto the zombie attacking Mr Gomez; grabbing him by the waist and throwing him out through the door and into the halls. He slams the door. Mr. Gomez is screaming, he's dying. He spits up a lot of blood and dies.
The moment is silent, the room for a small instance is completely silent except for the zombie's snarls. Mr Gomez bursts back to his feet loudly, Randal looses his grip on the chain, the female zombie grabs one of the recruits and tears him open. Zombie Mr. Gomez is battering Ervin and trying to bite him, while fighting him off Ervin can only do one thing. Only utter one order. 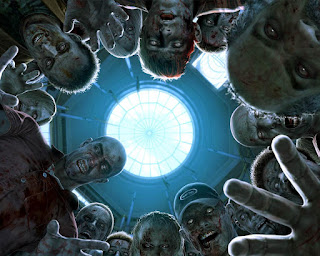 INT - The halls of the basement.

Rooney is racing through the hallways, he's been spooked by something. He starts to sprint but as he rounds a corner he slips in a pool of blood, he falls hard. He's covered in red. He takes a second to take in the scene, that second costs him.
With no warning whatsoever Rooney is pounced upon by a zombified Marty, his eyes are white, his skin has lost the color of life and his mouth is covered in fresh blood.
Rooney is slammed to the ground, the zombie never lets up. It's wild in it's movements; it's without thought. It's a rampaging animal beating Rooney up. He barely, BARELY kicks the zombie away and makes a break for it. He's been heavily battered.


And from there I have to take a break from DOPE to work on something else, something called the Beautiful...

Next post I'll explain but it's actually a project that we've already filmed some content for.
Posted by Unknown at 8:35 PM