I am working on a script. It's for a series of internet shorts about a bunch of guys living together who are each under house arrest.

I am pretty much freeballin' this first script. I've put no planning into the plot, I really don't know where it's going. I decided to write the first script about an investigation to determine which one of the men is guilty of using the house computer to put some dick pics onto the internet because dick pics are funny and I thought I could get some mileage out of it. Then I also introduced the idea of one of the crazier housemates keeping a box full of insects because...I don't know. I don't know how I am merging the two either. Anyway:

In the living room Benjamin and Gordon are acutely aware that there's a meeting happening in the kitchen.


GORDON
I bet Conrad's still trying to convince everyone the dick pics aren't his.

BENJAMIN
You think it was him too?

GORDON
Karp said it was either him, you or me and I know it wasn't me. So...

BENJAMIN
Right. Wait, what makes you so sure I didn't do it?

GORDON
I just can't imagine you doing that. Showing off your dick.

BENJAMIN
I wouldn't.
But why do YOU think I wouldn't?

GORDON
You don't have a nice dick. I can tell.

BENJAMIN
What do you mean you can tell?

GORDON
You just have that kind of face.


What am I doing? Seriously where am I going with this? A box full of bugs? I am kind of writing myself into a corner here. 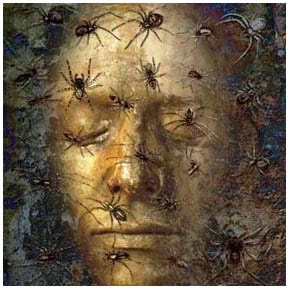