This Post May Offend - House Arrested: The Dick Pic - Cont'd 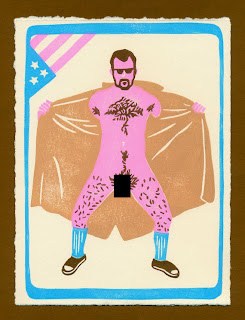 I am writing a script for a series about a bunch of guys under house arrest and their parole officer. This episode is about the parole officer intercepting a sexy email that contained a picture of one of the men's penis's and the investigation to find out who's it is.

The story so far.


Officer Karp enters the room from the outside, flinging away his cigarette. He sighs.

OFFICER KARP
When I took this job I thought I scored the sweetest gig in the department. I can be a probationary officer where all my responsibilities fall under one roof, no more driving all over the city to check in with you people. I thought I had it pretty good. But now here I am, about to give three grown men a penis inspection and I am left feeling pretty awful about myself and the decisions that led me here. Who wants to go first?

OFFICER KARP
Gordon, thanks for volunteering. Benjamin you're next, then Conrad. We'll go into the other room, just let me print out a picture of the penis in question for comparison.

BENJAMIN
This is SICK!

OFFICER KARP
Do you think I WANT to do this? Do you think anyone want's to see YOUR penis?

BENJAMIN
Why'd you say it like that? Mine's NORMAL! Don't listen to Gordon.

ANDRE
Yeah probably.
OFFICER KARP
I am tired of hearing the word dick. Gordon let's get this over with.

GORDON
What? You want me to just go in there and flash you?

OFFICER KARP
Just like a doctor's physical Gordon, there's nothing sexual about this.

GORDON
Yet this still feels like I am a call girl who has to show herself to some weird businessman. I am not touching myself.

OFFICER KARP
I DON'T WANT YOU TO!

Gordon reluctantly leaves into the other room with Officer Karp, Benjamin knows he's next and he's very stressed out at the idea. Conrad turns to Andre.

CONRAD
This is my chance. Keep Jeremy busy, I am going to go search his room.


I'd like to think I can wrap this up in only a few more scenes but by my count I have about 5 more scenes left. The next one is the hardest, I am supposed to make a scene where Conrad digs through Jeremy's creepy room to find his bug box and I have no idea how I am going to put that together.