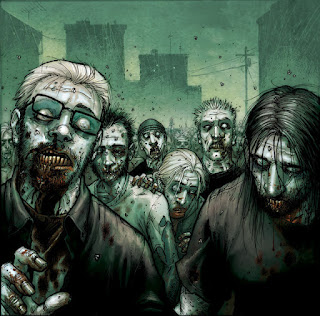 Randal has a clip board and some medical instruments with him

RANDAL
Hey Ervin, I heard we have an unidentified zombie here.

ERVIN
That's right Randal; tell my recruits how we go about identifying our zombies.
RANDAL
Well we've found that the best method of identifying who these people were was to set up a database of all the zombies we find and make it accessible to everyone in the public that's looking for one of their loved ones. We post descriptions and pictures of the zombies we find and we try to be as detailed as possible for anyone looking. So what I am going to do here is look for any identifying marks like a tattoo or birthmark or a scar, anything that makes identification a little easier.

Randal goes to begin his identification but is stopped by Ervin

ERVIN
Whoa, where's your partner?
RANDAL
I don't need him
ERVIN
Two partners for zombie inspections. That's mandatory.
RANDAL
Then you help me.
ERVIN
Absolutely not, not with a classroom of recruits here. Wait for your backup.
RANDAL
He's been watching over every little thing I do lately, if you want him; go get him. I am starting this inspection.

INT - The halls of the basement.

Randal is walking through the halls towards the classroom, the halls are winding and dark, it's unnerving.
With no warning whatsoever Rooney is pounced upon by a zombified Marty, his eyes are white, his skin has lost the color of life and his mouth is covered in fresh blood.
Rooney is slammed to the ground, the zombie never lets up. It's wild in it's movements; it's without thought. It's a rampaging animal beating Rooney up. He barely, BARELY kicks the zombie away and makes a break for it. He's been heavily battered.
INT - Classroom
Back at the classroom Ervin and Randal are still bickering over his not having his partner with him.

ERVIN
That's it. Mr. Gomez, do you know who Rooney Rodman is? He's in inspections and removals.
Mr. Gomez
Yes, I saw him getting yelled at by Mr. Dickmyer earlier.
ERVIN
Yeah that's him. I need you to go find him for me.
Mr. Gomez
Ok.

The young recruit Mr Gomez rushes up to the door and opens it. Like a great white shark bursting through the waves to catch a seal the zombie that was Marty's partner bursts through the door and onto him. He never has a chance, his neck is ripped apart by the zombie's teeth. Ervin screams for the rest of the recruits to get back. Randal is startled off his chair and falls into the female zombies. Her restrains slip and she bursts forward after the recruits. She's loose but she drags chains behind her now.
Randal does what he can and quickly grabs hold of her chains, stopping her just short of tearing into one of the recruits.
Ervin runs to the intercom on the wall and screams, his voice is cracking and stricken with panic.

ERVIN
LOCK DOWN THIS BASEMENT NOW! WE HAVE A ZOMBIE OUTBREAK! 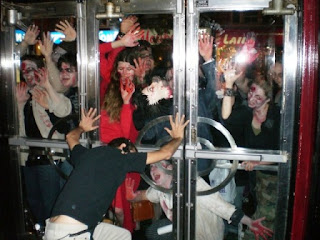