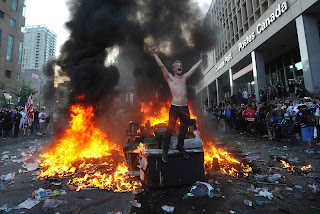 Ryan is a lifelong Torontonian, he's been living in the city for over thirty years and is jaded to all the city's festivals. After a month of city wide celebrations Ryan is ready for some peace and quiet as things settle back down. On this one average day however the city is uncharacteristically packed, people from all over the world have come on this nondescript day; filling the streets. There's something about the crowd that feels hostile, there's a nervous anticipation in the air that seems out of place. The crowd spills out onto the streets as the sun goes down, Ryan navigates the large gathering of people; he feel an unease in the air. There's a unnerving calm as the mass of people seems to be waiting for something, he notices an interconnectedness to the movements of the people. They're all checking their phones as though there's something they're all waiting for. The crowd looks off, these people are all hardened figures, no joy or kindness on any of their faces. Frankly, they all look like convicts, Ryan hurries his pace. There's something wrong about all of this. A sound makes its way across the crowd like a wave, a series of phones going off and alarms being rung. The sound is almost deafening, thousands of people, thousand of alarms going off. What follows is a single moment of quiet and then a blood curling roar of the crowd as they all in unison explode into violence. Thousands of people committing thousands of acts of random violence, tearing the city and it's people to shreds. Ryan is caught in the middle of the single largest act of planned terrorism in human history. All the evil, sick, twisted people in the world have descended upon his city, they found each other online on sites that only the most perverted people can stand to frequent. They're here to create chaos, they're here to murder, thieve and destroy everything in their path. Ryan and the city's citizens are caught in a hurricane of torture and madness, giving witness to the most horrible scenes of human cruelty. To survive, Ryan has to become as heartless as his attackers.

I was in the middle of a riot once, I walked out of my gym to find absolute chaos in the streets of Toronto. The G20 summit was in town and everyone freaked the hell out. Check this photo op. 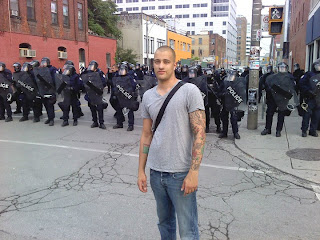 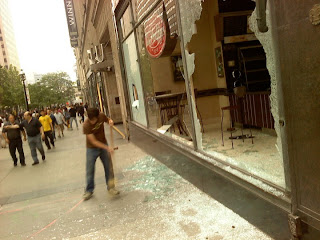 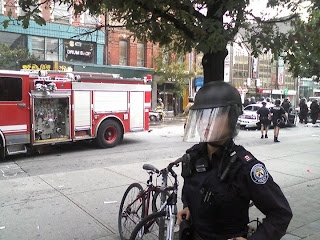 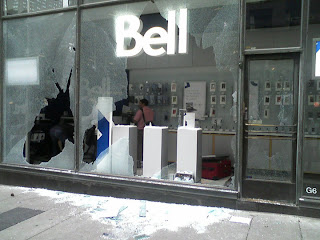 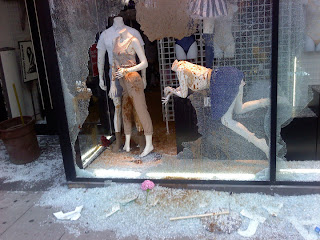 That brown stuff is poo. Rioters threw bottles of poo through these windows. It STUNK.
Posted by Unknown at 10:11 PM