I am too trusting. Please don't steal this idea, if anyone wants to hear more about it or even work with me on it then hit me up. This is my first draft, there's a lot I wan to add. 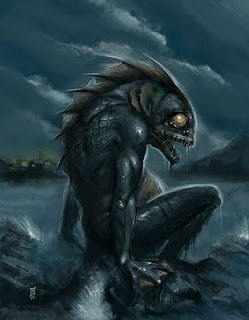 Logline: Stranded on a small boat in the middle of the ocean; Darcy's honeymoon has become a nightmare. Her husband has vanished and her boat is being stalked by a terrifying creature in the water.


Darcy and her husband Cade are about to embark on their honeymoon adventure, they plan on taking their small two person sailboat on a trip around the world. Making their way from California they plan on sailing the Southern Pacific route by way of the Pacific Ocean. Darcy isn't experienced but Cade is an avid sailor and has planned this for over a year, he's excited to take his wife on a trip around the world. Darcy is nervous about it but trusts Cade and loves the romantic idea of going on this adventure with the man she loves. Amidst well wishes and jealous congratulations from her friends the two set sail and head away from port, the weather is beautiful and the sun creates a golden glow on the water. By the end of the first day they find themselves all alone on the water, the lights of California are just visible on the horizon. Darcy is amazed by how peaceful it is, her reservations of the trip begin to fade. Cade surprises her with her favorite wine and a picnic on the bow. They make love under the moonlight. As she begins to fall asleep down below deck she hears a strange call off in the distance, something high pitched and clicking. She can't place it but dismisses it because it's so far away.

The next day Darcy wakes up alone, the boat is rocking heavily. She heads above deck and finds Cade working furiously to prepare for an impending storm, he tells her they need to get their sales down and have their emergency equipment ready. She's scared, he tells her not to worry; taking the time on that swaying boat to hold his wife and look deeply into her eyes and kiss her. He tells her again that it will be ok. Her nerves steady and she asks how she can help, he tells her to run down below and bring him his emergency kit. Darcy races down below, finds it and heads back upstairs. On the bow she sees Cade, mouth agape with a disturbed look on his face standing by the edge and staring out into the water. He's scanning the water as though he'd just seen something. His calm demeanor has changed, now he looks startled and nervous. Darcy snaps him back to reality and they get to work.

It's night now and Darcy is in bed below with Cade, the boat is being assaulted violently by the storm outside. Cade is holding Darcy to keep her calm. She closes her eyes and tries to shut it all out. Cade tells her that he’s there with her and she’ll be ok.


The next morning is calm, she wakes up alone in the bed again. Light shines in through the door which has been left open. She gets up and heads topside, when she gets to the top her stomach drops, she's overcome with paralyzing fear and disbelief. She's alone, Cade is nowhere to be seen. Panic sets in immediately,  she races around the small boat looking for him, eyes welling up with tears. She screams for him, she checks the water around her and screams his name at the top of her lungs. No answer. She races to the radio which she doesn't know how to use, she turns the dials desperately begging anyone listening for help. The isolation, the panic all hit her. She stumbles back below deck and falls to the ground unconscious.

It's later in the day and dark out, Darcy is lying in a ball on the floor. She's awake, lying there silently talking to herself; it's deathly silent. She perks up when she hears something on deck, she listens attentively. She hears it again. There's someone walking around up there, it must be CADE! She runs upstairs calling his name but what she sees startles her, she catches a slight glimpse of something slumping off the deck and springing back into the water. She grabs a flashlight and scans the water, shaking. She screams out once again for Cade and swings the light along the water. She catches the movement of something darting back underwater and drops the light in fear. She thinks she saw a face. A face of something, not Cade. She hears the same high pitched clicking that she heard on the first night, only now much, much closer.

Daytime - Darcy goes up deck to find that the boat has been damaged. She tries the radio again but doesn't get a signal, her phone is dead. She scans the boat for supplies. She finds first aid supplies, boating tools, a flare gun, there's enough food to last her a week or two. Cade would have made sure to be well supplied.

She tries to set the sail but isn't sure how. A gust of wind swings the rigging into her, knocking her into the water. She was hit hard and was rattled; underwater she struggles back towards the surface. In the distance she sees something swimming towards her. With every ounce of strength she races to the surface and pulls herself onto the boat. She spins around to see a shark, it missed her by seconds. She's rattled, scared and doesn't know what to do, she's in the most terrifying scenario imaginable and she knows it.

Time passes, it’s getting dark now. Darcy is on the deck sitting by the radio which looks like she's been trying to use it for a while, there are papers around it, a makeshift antenna...Darcy is eating a cereal bar. She hears the sound again, the high pitched clicking of the creature in the near distance, she clutches the flare gun closely. Darcy speaks into the radio. She broadcasts a distress plea to anyone listening. She talks about her boat, it's damage and her situation. She states that she thinks there's something in the water following her, she says that it comes each night, she says she feels like she's going crazy and finally she talks about Cade and how scared she is. There's absolutely no answer. Its starting to get dark. In the distance we hear a high pitched clicking sound. Its getting closer.

It's night, it's black out. Only the moon provides light, the glossy sheen of the boat reflects it into the water directly around the small vessel. It's easy to forget how immense the ocean she's lost in is with so much of it blacked out. Darcy is hiding below deck, she's curled up in a corner and absolutely terrified. She's holding the flare gun closely. She can hear the sounds the creature is making in the water all around her. Its stalking the boat and seems much more active at night. It gets quiet, extremely quiet. Middle of the ocean quiet. She hears the sound of it clawing at and probing the boat, exploring it underneath her. It makes its way up the side and she can hear the sound of it slumping onto the deck. Its topside, she terrified. She can see it's shadows, she can see movement, she can hear it. It's on the bow and it's slamming around. She can hear a squishy crunch and the sound of tearing, the creature screams out. She makes herself as small as she can and disappears into the shadows bellow, clutching her gun.

She wakes up the next morning, and heads upstairs to where the monster was. She finds a LOT of blood and the torn up remains of a shark on her bow. The blood will attract predators, she has to get out of there. She has to get the sail working. She spends the day working on it, as it gets darker she hears the creature's call moving closer and closer, finally as nights draws her sail snaps into place and she starts to move. She tears up, thankful and also finally facing the fact that Cade is never coming back.

Its night. She's on the move and suddenly her boat is slammed. She's sent flying. She screams 'NO', she can't believe it. She thought she left it behind. She's slammed again. Darcy takes to the wheel trying to steer away, it’s an act of desperation; she has no idea where the creature is. She's slammed again and knocked to the ground. She sees her sail come loose and rushes to fix it, it’s so dark and she struggles to repair the sail. She picks up her flashlight and shines it on the tangled rigging. From behind her appears the creature, she spins to shine the light on it but it takes a swing at her. The swipe the creature takes knocks Darcy to the floor and obliterates the rigging of the sail. The sail falls and the creature jumps back into the water. Darcy narrowly avoids being killed by the falling sail. Rigging falls into the water.

Darcy is hurt, she reaches into her waistband and makes sure she has her gun. Suddenly the bow of the ship begins to dip, something is pulling it down with incredible force. The back end of the ship lifts out of the water, the creature is pulling on the rigging. The pole its attached to is damaged, Darcy kicks the pole over and over until it snaps apart and the rigging is pulled underwater. The boat levels. The sail is destroyed, its dawn. Darcy can’t stand up, she’s been battered.

As dawn starts to break the creature is coming. Darcy is laying on her stomach, hurt, she hears the creature board the boat and slump towards her. The creature grabs her from behind and she spins around and puts a flare into the creature's chest, it falls backwards dead and slides into the water.
Its still dark out at the crack of dawn, the broken boat is drifting with Darcy unconscious. The boat comes to a stop, it's hit something and Darcy wakes up. It hit rocks in the middle of the ocean. Darcy looks up to see a very small island, roughly the size of a tennis court and swims towards it. The boat sinks.

On the land she finds the carcasses of all manner of sea creature. She also finds Cade's half devoured body. Behind her she can hear the sounds of the creature, then the sound of others, coming from several different directions. She's on her knees, she doesn't even turn around, a few of the creatures lurch onto the island out of the water and slump towards her. She doesn't turn to look, she has no more fight in her, she's resigned to her fate. She plays with her wedding ring as they get closer. The camera closes on a shot of her wedding ring moments before she's killed for sure.