SMASH. A pack of vampires break through the window barricade. One vampire springs into the room.

Randall looks across to see a couple more vampires making their way through the window and springs up to re-enforce the window barricade, pressing his body against the old shelves tipped over against the window keeping out the invading vampires. 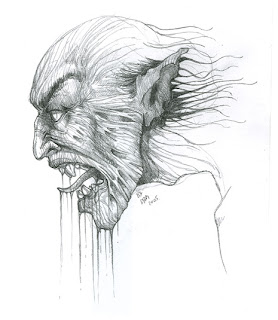 The vampire in the room lets out a frightening hiss. Rooney jumps up to stand beside Ervin. At the door a hand pokes through the opening, the vampires threaten to break through in a second, Rooney jumps back to the door and seals it. Ervin on his own has to deal with the vampire.


The vampire pounces on him, Ervin has a death grip on it around it's throat and he's pushing it away from his body; keeping it's fangs just out of reach of his jugular. Rooney and Randall are both spending every bit of their focus keeping the rest of the monsters outside.


Ervin reverses the position with the vampire, he's on top and he begins to ground-and-pound it. The vampire takes a beating but it's incredibly resilient, he screeches at Ervin and mule kicks him across the room. Ervin is slow to get up, in the background we see the vampire pounce at him once again.

Ervin spins around and catches the vamp underneath the armpit and around the head and 'Rock Bottom's him through a nearby table.


The table shatters and Ervin grabs a broken fragment. He reaches to the sky and as the vampire roars he strikes down and stabs it in the heart. The vampire starts to glow.

Randall
You did it! He's going to turn into dust now.

Pop. The vampire explodes and his entrails cover the room and all 3 men.

All three men take a beat to spit vampire bits out of their mouths.