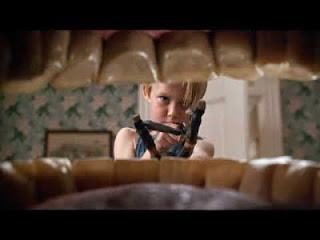 - One afternoon I was lying on my bed and my brother was sitting across the room talking to a friend. I had in my hand a broken microchip and an elastic band and I wanted to see if I could slingshot the microchip across the room and hit my brother. Just, y'know...to see if I could. I was 10. I found the sweet spot on the microchip, loaded it up just right and sent it flying towards him. My eyes locked onto the chip as it took off into it's flight and in that moment all time slowed down. My eyes locked onto the spinning microchip so tightly that I could see and calculate every single revolution it made as it whirled through the air. I remember seeing my target (my brother) as a blur in the background; I remember seeing him bend forward while the chip was in flight. I actually had time to assess that the chip was no longer on a collision course with his chest as I had planned; it was going to smack him in the face. The blur came into focus and my makeshift ninja star finally made contact, in that moment things went back to normal. Time sped back up and the microchip bounced off his cheek and achieved escape velocity. I don't remember the aftermath but I know my mom got involved.

- Out by the dumpster behind Liquidation World where I once worked was a large nest of wasps. They made their homes in the dumpster we had to use every day, scary stuff to lesser men but I was armed with a powerful weapon. A plastic baseball bat, the next best thing to a tennis racket when it comes to bee swatting. I cut a swath through my attackers on my way to throw out the day's garbage and finished the job. On my way back one wasp touched down on the top of my head, knowing I would be stung in seconds I acting swiftly and purely on instinct. I dropped down, falling to my back while swinging upwards and blasted that little ****sucker out of the sky. Try to sting ME? I got to my feet quickly, still under attack and swatted two more out of the sky and then...either it was cockiness or it was a warrior instinct that I tapped into, bred into man after thousands of years of hunting and spear throwing... I threw my bat at the last remaining bee as it buzzed off back towards the dumpster to (I assume) get backup. Backup that would never come. I nailed a frantic, buzzing wasp from 30 feet out with a plastic baseball bat that I threw backhand. Fluke? Maybe...actually no, no it wasn't a fluke.

This is an essentially accurate rendering of my throw.