Finding a beautiful girl dying in her own blood, a violent monster promises to take revenge on her killers.


This is a story which I wrote and posted on this blog before, I came upon it again recently and felt like there was something really good there. I loved the sweet, disturbing opening scene and felt like it deserved to be fleshed out. I rewrote it and cleaned it all up. Here it is, a violent superhero revenge story in three short acts accompanied by my childlike illustrations. It's a pain converting this from a word document BTW so the formatting is all over the place. 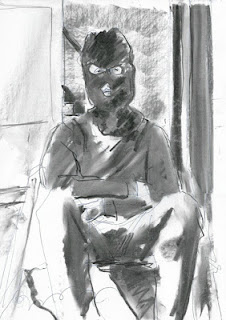 
Interior - A dark house. A pair of black shoes walk along the dark floor; past various broken objects. As they pass by a small dining room they come to a stop, through the blackness of the room a figure stirs, a light breathing comes from the heap on the floor. Then a whimpering. She looks up from the ground, blood smeared on her cheek. The man staring back at her is wearing a torn up and tattered black ski mask, he's dressed in dark clothing. The only glint of light to his figure comes from the light shimmering off the metal of all the knives attached at his chest and waist. He's huge, she tries to lift her head for a better look at him but she doesn't have the strength.

The dark stranger lays down on the floor staring into the eyes of a woman who he knows is in the last moments of her life. She's trying to speak, she looks sad and is trying to speak her last words. The man speaks first; in a soft voice that contrasts his intimidating figure.

"Then you know you don't have to worry about those men anymore."

"Don't try to move, it just makes it worse."

"That goes away soon. I want you to close your eyes"


She whimpers no, she's scared and her eyes are getting glassy. The man is viably affected by this.

"I am sorry I didn't get here sooner. Sometimes bad things have to happen first for me to find the bad guys"

"It doesn't hurt now does it? Good Sweety. You'll like this part, everything slows down now, you can step outside yourself. It feels like the first time you've ever really been conscious. You're seeing the people you love aren't you? "

She starts to finally fade.

"I promise I'll torture those men for you"

She smiles. She dies. 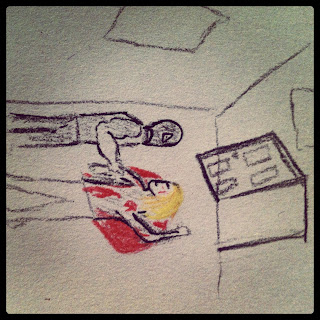 The man takes a moment, the room is quiet and very dark. He continues to lay on the floor. It's deadly quiet, he lays still; staring at her for while longer. Outside he hears the sound of movement, his eyes perk up. He smiles but continues to lay on the ground unmoving even as he hears the sound of someone enter the house through the back. The footsteps get closer and closer until they stop just behind him. He takes one last long look at the girl and then slowly gets to his knees. There's someone right behind him and he knows it but he doesn't show the slightest hint that he's worried. He gets up off the floor onto his knees, he turns towards the doorway and stops. Staring back at him is the barrel end of a dirty shotgun, it's held by a skinny Scumbag in a white t-shirt with blood stains all over it. Her blood. He speaks. 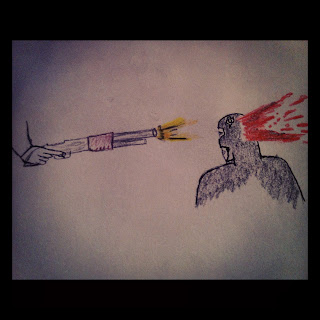 The Scumbag pulls the trigger, the bullet goes through the man's mouth and explodes out the back of his head. He slumps backwards, his eyes seem impossibly focused and locked on his killer's as he falls backwards. The scumbag is startled, he runs out to the backyard where 2 other men; a Dirtbag and a piece of Garbage are loading up their truck with stolen items, the Dirtbag is trying to wash the blood off of his face. Beside him is a large knife.

The men drop what they're doing in a panic and rush to their weapons. There's confusion and fear.

SCUMBAG
I think he's dead. He's some guy, he was inside with the girl and I shot him in the head.


The cowards head inside, the knowledge that they've already shot the mystery person in the head isn't even enough to instill confidence in this pathetic trio. The night is dark, the house is almost pitch black. One can barely make out the figures as they cautiously stalk the house towards the room where the stranger has been murdered. The soft light illuminates the group as they inch closer, they see the body of the girl first and don't even react. Towards the far wall they see the slumped body of someone else.

The darkness of the room blends perfectly with the darkness of the figure making him hard to see, they move closer...there's movement. They all ready their weapons and step forward, the scumbag with the shotgun is forced to take point. As he gets closer he see's clearly that the man on the floor is breathing, he's breathing very fast. There's a growling sound, something primal and inhuman. He spasms, his growling gets ferocious. He going to wake up, his skin greys slightly and his movements become more violent.

The Scumbag, the Dirtbag and the Piece of Garbage's faces have all gone white. They recognize the mask now, they know exactly who this is. They are in BIG trouble. The three men run, they flee to the truck. All three try to pile in quickly but the doors are locked, Scumbag fumbles for the keys and drops them. They fall underneath the car, with the other two screaming at him Scumbag drops onto his belly and goes fishing frantically in the dark underneath the truck for the keys. Underneath the truck he hears something break through the back door, he sees the others run. Something hits the car hard sending glass everywhere, the truck rocks hard after the blow. Scumbag wastes no time, he scurries out the other side in the direction of his friends. Behind him the truck is being torn apart.

He follows them into a into a shed and the trio quickly board up the door. The leader of the group is the Dirtbag, he's slightly older than the other two. They have a rifle held by Scumbag and two big knives held by Dirtbag and Garbage.


Dirtbag
Save those bullets. Do you understand me, they're our only chance. You don't pull that trigger unless you have it aimed a foot away from it's head.


Garbage
We need to run before he finds us.

A primal roar is heard, it's a violent and guttural sound. Wholly inhuman. They're terrified.

SCUMBAG
WE HAVE TO RUN!

Dirtbag
He'll CATCH US.
Shut up!


The room gets quiet in an instant, one sound persists. The sound of hard breathing against a metal shed door. A shadow seeps in through the small openings, there's something so unnerving about the beast outside's approach. It's movements are primal but with purpose, it knows it has it's prey cornered.


The back wall explodes apart, it smashes through with ease, Dirtbag charges it with his knife held high above his head, the knife comes down full force into the creature's neck. It has little effect, the monster grabs Dirtbag's arm and obliterates it. Dirtbag twists around and screams, facing the two horrified men. Blood gushes from his arm. The beast grabs his head from behind and pulls down on it like a pez dispenser, it snaps right off and rolls on the ground. The beast steps inside.

The man in the tattered mask is now the monster in the tattered mask. His visible skin is red and grey with a sharp toothy grin. He's something between a zombie and a vampire, his eyes are yellow and expressionless, his movements are animalistic.
Scumbag screams, Garbage runs. Scumbag pulls his gun and shoots, nothing stops it. Scumbag is pounced upon and torn apart.

Garbage is running as hard as he can, the beast can be heard closing in behind him. Garbage screams, the monster runs alongside him and strikes him down. Garbage goes rolling along the hard pavement of the road, his knife skipping alongside him, sparking as it clashes with the road.

He's hurt. His skin has been torn up from the fall, still he reaches for the knife but the beast gets to it first. Garbage tries to scamper away but he's stomped on violently. The beast bares down on him and holds the knife up, intending to strike down on his prey's head with the large knife.

As Garbage winces the beast halts, there's the first glimmer of cognitive thought to his movements. He shakes his head, like someone trying to shake out the cobwebs and regain sobriety. His pale yellow eye behind the tattered black mask give way to his human blue eyes.

He's back. Cockroach is back and the beast is gone. He looks up to see himself holding a knife, he looks down to see Garbage cowering.

Still in a haze his mind flashes back, trying to piece together how he ended up in this situation. He remembers a conversation with an older man, someone of tremendous melancholy who's expression is a mix of furious anger and sorrow. The two are sitting in a living room, the man speaks.


Father
"The address I am going to give you is the house where I believe Mr. Van der Sloot has taken my granddaughter, it goes without saying that I want her back.
But...I don't believe I'll get her back.
Men like me don't go to the police because the police are only good at arresting people, I am not interested in arresting anyone. If you're willing to help me I have one question I need to ask you."

Behind the mask the stranger's interest in peaked.

Father
"Cockroach. If they hurt my granddaughter will you show them mercy?"


Back on the road Cockroach snaps back, he looks down at Garbage.

Cockroach
Did you kill a blonde girl?

Cockroach
I don't believe you.

'THUNK'. The sound of the piece of Garbage having his head split open with a knife. 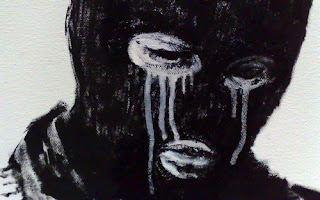