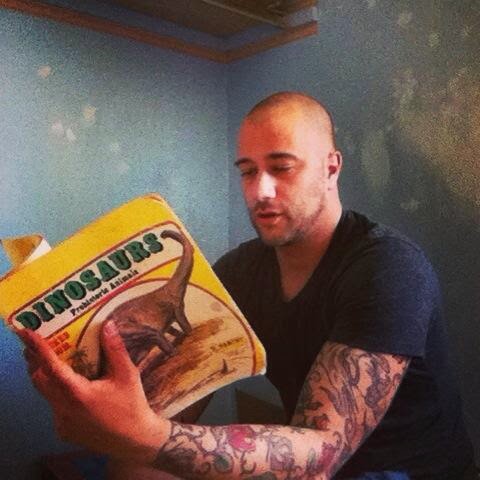 Writing is something I would love to get paid to do someday. Even if I don't, apparently I am going to keep doing it anyway because I've never been able to stop.

Here's what's come out of my head so far:

I finished my first movie script. It's a thriller about couple, a man and a woman who's love falls apart because each one thinks the other is a complete psychopath.

It's called I am Not A Weirdo

I also wrote a short horror movie called Lurking about a girl named Darcy who sets sail with her new fiance Cade on an ocean adventure across the world only to wake up alone one morning with no sign of him and something in a water stalking her small boat.

Want something lighter? Here's a short script about 3 roommates trying to decide if something is a spider or a hairy chocolate chip.

How about something dark? Here's a short script I just call the Hotel Murder script.

Being a comic nerd I felt it was my responsibility to invent a superhero. This guy's name is Cockroach and he's the last person you want catching you in the act of murdering a young girl.

I've tinkered with the idea of writing a romantic comedy but I've only gotten so far as writing a couple practice scenes. HERE and HERE

This one has gotten me in trouble because aparently it's controvertial to write a short comedy about a man who was date raped at a party and goes on a quest to find his female rapist. If she's ugly he's going to press charges. If she's hot he's going to ask her out.

I wrote an internet show called House Arrested about a group of dipshits all under house arrest. I played with a couple variations on the idea.

I also wrote and developed a half hour workplace, action comedy about a group of low paid, government ghostbusters called DOPE (Department of Paranormal Events).

A story about a loser who will never, ever get the girl

A story about a lucky guy who skinny dips with a beautiful woman and doesn't notice the monster behind him.

I've also got a couple example of ideas under development. One is a video game show I was working on with a friend called Pwned and the other is for a movie about a violent flash mob.

Here's an archive of videos I've made, many of them I've starred in.

This is the pilot we shot, it's essentially about two people who resolve to never work a day in their lives. It was called THE BEAUTIFUL and it features a guest appearance by Shay Mitchell.

Here's a gory horror short I was in called CLEAVER

Here's a trailer for another little short I was in, a heist movie called WORST LAID PLANS

Ok this...this takes some explaining and it's probably the thing I am proudest of. There was once a free animation site called Xtranormal. It allowed you to choose characters, a background and a few animations to write a scene around. You were limited to what was presented in the backgrounds, meaning if you chose to do the train settings then you would have to write a scene around the train and whatever else was there in the pre-set image. The feature allowed for text-to-speech writing which resulted in a couple of robotic voices so it's best to imagine this is taking place in a world where everyone sounds like Stephen Hawking. This was about writing within limitations and forced you to be creative. I miss that site. Here's what I came up with - HEROES OF JUSTICE

This is just a simple little clip of me reading my favorite supervillain monologue from Final Crisis #3 when I was sick and my voice was super sexy.

This was actually my attempt to bring my favorite comic character back from obscurity. I call it the Killrazor Experiment and it was unsuccessful.

The time I caught the Norwalk virus while testing playstations at work.

I am 6'4 and can't dunk, it's my single biggest failing in life.

The time a bully had me cornered in the washroom.

I once considered getting into a career in copywriting before it was explained to me that the actual profession has little to do with writing and more to do with graphic design. Anyway, I used this blog to try it out.

Men should be the ones buying SCENTED CANDLES.

Stubble so sharp it can be used to peel potatoes? Try these shaving products.

Monologue Mondays were a thing...until I totally forgot about them. It was what it sounds like, I would write and post a stand alone monologue. They were fun, I should do more of these.

Hey racist. You're bad at science.

That girl bore a hole in my mind.

I hate CEO's - This one I actually shot a video for. I got my friend (a non-actor) to take a crack of reading it. Shot and edited on my iphone.

A poseur vampire guy defending himself.

I even wrote some poems.

There's more on this blog, if you scroll through you'll see me developing a changing all my scripts, generally everything you see above is a first draft and you can follow the building process as I go. Like I said, I am currently writing my first full length movie script and it's going very well. I am halfway through and I am proud of what I have so far.

I ask that anyone who comes across this, if you know of anyone who might be in a position to help a hungry writer get noticed then please pass this page on. This is what I want to do with my life and to make that dream a reality I am going to need to start asking for help.