Imaging Being In The Middle Of The Ocean and Coming Face To Face With A Messed Up Fish-Man? Seriously. Imagine That.

I am at the point in the script where I've already written out this scene, I rewrote a few things for pacing. I am actually making some pretty good progress on this thing, this blog works. 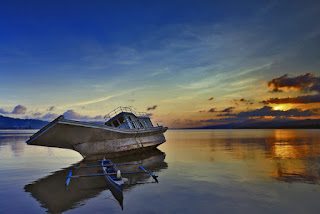 Darcy wakes up to find herself alone again, the storm has stopped and the water has settled. There's a soft rocking and the sound of a calm ocean gently splashing against her boat. The door topside is open and gives frame to soft rays of sunlight as the day breaks. The sunlight outside is strong and gorgeous. It lifts Darcy's mood and she heads upstairs to find Cade.

When she gets to the top she can't see Cade, she looks around the small deck but doesn't see him, there are scrapes along the surface of the boat and the sails have be battered by the storm. The boat is in rough shape. Darcy races back down stairs to check for Cade, he's not there.

Now the panic is starting to hit her. She calls out of him.

Nothing but eery silence.

Darcy looks in the water, running around the boat looking for some sign of Cade. There's nothing. He's vanished.

The disbelief hits her, it only took a few panicked seconds for her to search the small boat and he's nowhere to be found. She runs out onto the bow, her head spinning. He has to be in the water, he HAS to be in the water. She screams out again and again at the top of her lungs until her throat is coarse.

Silence. Darcy is frozen where she stands, silently begging Cade to show himself. She runs over the the radio; it's been destroyed by the storm. She goes back into the boat and tears it apart, looking for anything but finding nothing, no sign of where Cade went. She cries and screams until finally passing out from the stress.

Evening - Interior: Below Deck - It's getting dark

A large splash is heard in the water near her boat, Darcy springs to life and runs to the bow of the ship; she calls out to Cade but there's still no response. The splashing came from about 20 ft away but it's too dark for her to see anything clearly. She frantically searches the boat until she finds a flashlight and races back to the bow to shine the light where she thinks she heard the splashing. She scans the water, her desperation and sense of panic is evidenced by the noticeable shaking of her light. 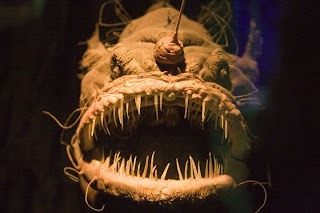