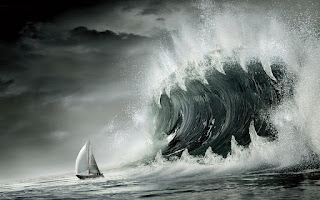 I am still rolling on this horror script, my goal is to have a finished feature length horror script finished by the end of next month. Once again here's what I am working on:

Logline: Darcy's fiance is missing and she's left alone in the middle of the ocean with a strange creature stalking her broken boat.

The next morining Darcy wakes up alone in bed, the ship is rocking and there's a lot of movement up top. Darcy gets up to investigate, as she takes the small flight of stairs leaving to the deck she notices the clouds. It's early morning but there's the ominous darkness to the day, the clouds seem to be making their way downwards; bearing down on her. Cade is racing around the deck securing everything on the boat, he runs over to a radio and tweaks the dials until he hears someone on the other end. He gives his position to the person over the radio who tells him he's going to have to batten down the hatches and make it through the night on his own. This scares Darcy.

Cade races about, he ties down every line, brings supplies below deck and double checks every inch of their small two person sailboat. Finally he races back below deck and comes up with two life vests, he hands one to Darcy, the gesture cements the gravity of the situation in her eyes and it shows. Amongst the rain, the rocking of the boat and the frantic pace of the moment Cade stops to comfort his love.

Cade
I always knew we'd hit a storm Sweetheart, this was always part of the plan. We're ready.

Darcy
Cade, I am freaking out.

Cade
You don't have to. Sweetheart I've stared into the eye of a million storms out here. Do you trust me?

Cade
I've got this.

Darcy
What do we do?

The storm breaks and pounds down on the small boat.

Cade
I'll do what I always do when the ocean picks a fight with me, I fight back.

The ocean is in chaos around them, Cade stands his ground. He holds Darcy's hand.

Darcy
The sunshine tomorrow is going to be beautiful.

With that Cade takes the wheel of the boat, he ushers Darcy inside as the storm assaults him. Darcy sits back and watches her fiance fight for their boat. He shouts as the waves hit him and break apart on the side of their boat; he taunts daringly at the storm. Thunder shatters the sky, the whole scene is too much for Darcy. She covers her ears, puts her head between her knees and closes her eyes.

The camera immediately cuts to a shot of Darcy in bed, she's curled up into a ball laying motionless with her eyes open. The boat is rocking, the storm outside is still assaulting their boat. Cade is beside her, holding her tightly. It's a touching scene, he kisses her; holds her tightly and comforts her. Outside the storm rages on.