TOP FIVE DINOSAURS OF ALL TIME

What can you do against this guy if he's chasing you trying to eat you? Poke him in the eye? Look how long that snout is. Just watch THIS scene where a Spinosaurus snaps the neck of a T-Rex like a trained assassin and judo master. 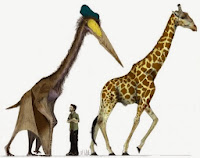 One time at African Lion Safari a giraffe stuck it's head into our car through my window. He just smashed his enormous head right into mine and nailed me with those fruity little things he calls horns. I can only imagine what would have happened if he had a giant beak and was a predatory bird.

It's a hell of a thing when you have all your weapons on your face. Horns all over the place, a sharp shield like forehead and an out of place, squid-like beak. It's just weird. Who hits someone with his face? 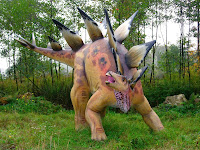 Stabby rocks growing out of his back and a 'f**k off' tail full of spikes. This guy's ready to go if you want to make trouble. He's also got a beak and those creepy kinds of eyes that horses have.

This guy is like that Irish guy from Gangs of New York who carried around that big club that he used to smash people to pieces. I saw one of these up close at the Royal Ontario Museum, that tail looks like the hammer of Thor.