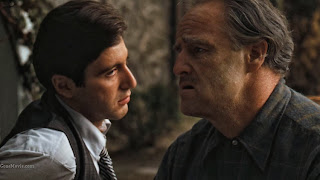 This picture represents the level of gravity I want this
scene to have.

Conrad and Andre are in the kitchen, Officer Karp is out back having a smoke, Benjamin and Gordon are in the living room, Jeremy is in the background looking closely at the walls, lifting up shoes, staring at the ground, digging around in every nook he comes across. Everyone is watching everyone else.

Andre is sitting at the table eating cereal, Conrad sits next to him. He speaks like someone who doesn't want to be heard by other ears, hiding behind the cereal box as best he can.

CONRAD
We need to talk.
What are your thoughts on what just went down in there?

ANDRE
I think you're the one who put a picture of his dick on the internet.

CONRAD
Wrong, I stopped doing that a while ago.
That's not what we need to talk about.

ANDRE
Alright, what then?

CONRAD
This box of bugs. Can you believe we have something like that in play now?

CONRAD
I don't like knowing that someone like Jeremy has a box FULL of bugs at his disposal. What if he wanted to weaponize this?

ANDRE
Is that what you'd do?

CONRAD
YES! and you'd be afraid to cross me. You could wake up one night to find me standing over you with a box full of spiders in my hand. We can't have a weapon like that in this house.

ANDRE
It's like the nuclear option. Just knowing he has that capability..

CONRAD
To cover you in bugs.

CONRAD
Then let's team up, lets find that box because you know those two can't be trusted with it.
(pointing to Benjamin and Gordon in the living room)

GORDON
(voice from the living room)
Why you pointing at me? It wasn't my dick Conrad.

ANDRE
I am with you on one condition, we destroy the box of bugs when we find it.

Conrad straightens up in his chair, as he comes out from behind the cereal box he was using for cover he's startled and horrified to find Jeremy sitting right beside him, clutching something in his hand.

CONRAD
Gaahhh! What are you doing?

JEREMY
I caught a bug.

CONRAD
Eww, and you're holding it with your bare hands?

JEREMY
So? Its just a potato bug see?

Conrad slaps away Jeremy's hand sending his bug flying onto Andre. Andre jumps up and screams.

He flails away in a panic.

Yeah I am still pretty much winging this, I have no destination for where this script is headed yet, all I know is that it's somewhere stupid.