Lets Finish this! - Tom finishes his horror movie, here's how it ends.

Sooooo...I have no idea how long this movie is. As a script it falls way short of what a typical movie script usually comes in at but there's so little dialogue that's it's hard to gauge. This thing is all action, slow moving tense build ups that play out much slower than they read. Anyway, I'd like to move on to something new so I am packing this thing up. I can always revisit this script and add more later but this is a good starting point that I can show to people to try to get this thing off the ground.

You can read the whole script here: LURKING 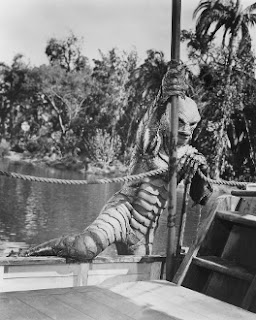 As dawn starts to break Darcy is clinging to a what's left of her boat, it's completely dead in the water. The creature that's now circling her has completely destroyed it and for the first time seems to be aware of her presence on the boat. She can hear the excitement in it's sounds, she can sense it's trepidation as it takes it's time to inspect the stalled wreck. Darcy knows she's doomed, there's no more doubt in her mind. Even if the creature were to turn around and leave her, she's still stuck in the middle of the ocean on a boat that's barely held together. The monster's clicking call is frenzied, she freezes. She can hear it scraping against the boat, she can't hide so she stays still. She can hear the splash of something pulling itself out of the water onto the boat, it's dark and she can just make something out from where she's laying. She sees something slump it's way onto the boat, it has dark scaly skin, sharp spines all over it's fins and a large tooth filled mouth. It doesn't walk, it just slumps forward, making its way around the boat. Darcy sits in complete fear. She's defenseless, she lost her flare gun in the chaos from before.

She tries to press her body as firmly against the side of the boat as she can, terrified to make any movements. The creature slumps around the boat, until it comes fully into view. She can see it's eyes, they're black and staring in her direction. The creature isn't sure what it sees, it approaches cautiously, Darcy tries to remain perfectly still in hopes that she won't peak it's interest. The creature slumps closer and closer, it gets very close. The water and slime of the creature drips onto Darcy's skin. The creature looks her up and down, it seems almost as nervous as she is. Curious; it goes in closer, Darcy closes her eyes in fear. The creature takes an exploratory bite into Darcy's shoulder; causing her to jump up screaming. Startled; the monster throws her across the boat. She lands hard, several feet away. Her shoulder is bleeding badly, she's slow to get up and the creature is coming towards her. She gets to her feet just in time to be pulled right back down by the monster who's grabbed a hold of her leg. It pulls her towards it's mouth. Darcy fights with everything she has to free herself but she's no match, her foot inches closer and closer to the creatures giant teeth. Darcy screams out as the creature takes a bite of her foot, she finally pulls it free, losing a large chunk of it in the creature's teeth.

In absolute agony now; Darcy crawls away though the small boat doesn't offer much room to escape to. Darcy leaves a pool of blood behind her with every step forward that she takes, the monster behind her has a taste for blood. Darcy crawls over-top of the sail lying prone on the deck, the monster is steps behind her. She gets a hold of some broken rigging and swing it around, hitting the creature. It's hide is meant to withstand the pressures of the deep sea, it's thick and dense, the blow has no effect. Unfazed; the creature pulls her towards it once again. Darcy claws at the sail, pulling at it in a desperate attempt to escape. She pulls and pulls until she reveals her flare gun hidden underneath. The monster pulls her in close and goes to bite her again, once it's teeth sink into her leg she screams out in pain. This time she fights back; clawing at the creature's eyes and causing it to drop her. Darcy crawls as fast as she can to the flare gun with the hungry monster following behind her, she can barely lift the gun with her torn up shoulder. The creature bears down on her once more, she manages to press the gun to it's neck and pulls the trigger. The flare tears through the monster's neck, burning a cavity deeper and deeper into the monster's throat. It falls to the ground and violently convulses. Flopping it's way back into the water.

Darcy is left alone, completely alone. She's on a broken, slowly sinking boat in the middle of the ocean and she's bleeding out badly. This is it, these moment are her last. The boat slowly drifts on the slow moving water, Darcy starts to lose consciousness. She sees Cade at the wheel of the boat, he looks at her reassuringly. A tear trickles down her cheek, she smiles. She closes her eyes and loses consciousness. Darcy stay unconscious for days while her boat drifts deeper into the ocean. 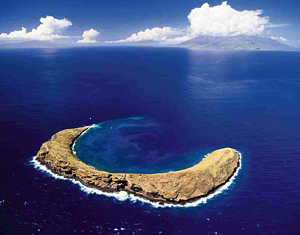 Darcy's feels the boat bump something, softly at first but then the boat comes to a sudden violent stop. Darcy lifts her head up, gets to her feet and wobbles to the front of the boat, she can't believe her eyes. She's hit land. A tiny island no bigger than a football field hidden away in the middle of all this ocean, the boat is finally finished and taking on water. Darcy hops off the boat and makes her way onto the island. It's barren, almost void of vegetation. Darcy starts to explore, it's rocky and littered with bones. Darcy walks the island, she see's all manner of carcass littered across the rocky landscape. Darcy freezes in her tracks, her face twists into a horrified expression. She breaks down. In front of her is Cade's partially devoured corpse. Behind her she can hear the sounds of the creature, then the sound of others, coming from several different directions. She's on her knees, she doesn't even turn around,she's given up. A few of the creatures lurch onto the island out of the water and slump towards her. She doesn't turn to look, she has no more fight in her, she's resigned to her fate. She plays with her wedding ring as they get closer. The camera closes on a shot of her wedding ring moments before she's killed for sure. 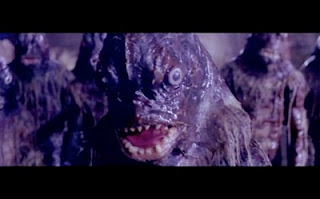