I am going to finish this damn horror script - LURKING Continued

I am still jamming on this horror script, I am nowhere near meeting a feature length requirement but I am probably just going to wrap this up in a few more pages. There's so little dialogue that it's hard to really say how long this script would play on screen and I can always add more. This will be a sample size script.

Darcy stands up, she's finally motivated by fear to get her boat moving. Cade isn't coming back, he's gone. The high pitched sounds of the creature penetrate the coming dawn, she runs to her sail. Through trial and error she's finally figured out how to hoist her sail and lock down the rigging, she's not a perfect sailor and can't navigate very well but she's only interested in moving, she needs to get out of this spot where she's been stalked every single night by some horrible monster who she believes killed her fiance. Darcy can see movement in the water, something is streaking towards her fast enough to kick up waves. Darcy fumbles with her ropes, she's tired, stressed out and panicking. It's getting darker and she's losing light. The monster's been sizing her boat up for days, each night becoming more comfortable exploring the boat. Darcy knows that if she's stuck here for one more night with this thing she won't see another morning, it will find her and eviscerate her.

She snaps everything into place and almost instantly feels movement for the first time in a weeks, the wind picks up and soon she's quickly heading away from danger. She hears the call of the creature getting further and further away as the sun starts to set on the horizon. The only thing indicating the place in the water where she suffered through her most unimaginable nightmare is a small scattering debris from her boat. That's the closest thing Cade will get to a tombstone marking his grave, he's lost forever out here.

Darcy lets the wind take her as far it can as night falls, Darcy is exhausted. She hasn't slept in days, she's a wreck. She's barely keeping herself together and it's likely that even if she survives to see land again; she'll never be the same. The movement of the boat is equally calming and terrifying. It's the reason she was able to escape a creature that will haunt her nightmares for as long as she lives but on the other hand this wind could be pushing her further and further away from the shore. Darcy's slumps over against the cabin and slides to the floor, she has nothing left. Her head slowly falls to her shoulders, he eyes never quite shut. If she closes them she'll see him, Cade. Standing on the water asking her to come back for him, asking her why she left him. She finally fades, her body relaxes. It's quiet. Darcy rests for the first time.

SLAM! Chaos. Darcy and everything on the boat are violently thrown forward, the boat was hit hard by something under the water.  Darcy is hurt and buried by falling debris. It's here. It followed her boat, it won't leave her alone. Won't let her escape. Darcy's pathetic and well worn voice can only let out a squeak. 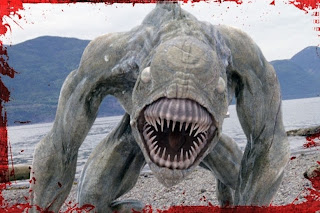