Before Watchmen: Rorschah Review and My Page 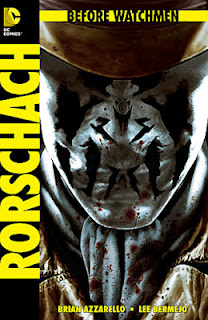 I read the Before Watchmen: Rorschach installment today, I guess it's common knowledge but I don't know if it occurs to everyone that we haven't seen ANY of this character since the final Watchmen issue and that was back in the 80's. He only had the 12 issues (or one graphic novel) of the Watchmen to make an impact in the public consciousness and he did. It's impressive. He really is one of those universally loved characters that made an immediate impact on you, you just wanted  to see more and more of him and as you read the Watchmen you'd be most excited about his scenes. In my opinion the Watchmen became popular on the strength of his character, he was certainly the stand out.

He's a warped variation of the Question (also a very cool character) made a little more interesting with a more violent form of the psychosis that overwhelms both characters. He was always one of th..........I am just now noticing that on that cover his rorschach mask makes a visual of himself with his own little rorschach mask and I hate it. How stupid is that? That's a little overly clever buddy.

The issue itself actually didn't need to be made, it offers absolutely nothing more about the character that wasn't said in the originals. I mean it's a good enough issue but that's more because Rorschach is f'n cool and it's just fun to see him do terrible things to people.

Basically it's a standard story about him trying to track the source of some street drugs while also keeping tabs on a serial killer. He meets someone who feels a little too Super Villainy from my liking and it pretty much ends there. If that sounds boring... 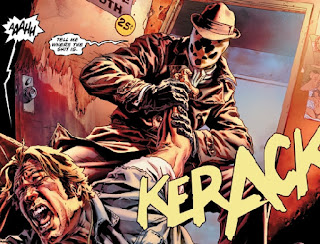 I'll check out the rest of the Before Watchmen series before I weigh in on whether or not they should have dusted these characters off or left them alone. Tomorrow I'll check out Nite Owl.

Anyway, here's my page. When we last left Rooney he was hurt and hiding from two zombies.

As the Zombie gets closer to Rooney it's distracted by the arrival of the first zombie. The two zombified workmen run off down a darkened corridor.


When it's safe to move, Rooney creeps forwards towards the classroom. There's blood all over the halls leading up to it, in the distance all around him he hears screams and commotion.

He opens the classroom door and sees no bodies but lots and lots of blood. The room is covered in a sticky dark red.

He hears a sound down the hall, there are several zombies coming his way. It's time to move. He races down hall to the main exit only to find it locked down.
I am pausing for one second to point out that as I write this my neighbors kid is SCREAMING off the balcony. It's driving me nuts.

The zombies give chase, he runs for his life but the two marauding zombies catch up with him, He never stops trying to run even as he's being grabbed and tugged at by the monsters. He's taken down but weaves and fights his way our of being bitten.

F**K it, this sucks
Uggg, I hate where this is going. I could stand to lose everything after the moment the Ervin screamed "RUN" and I know it. I was just seeing where I could go with keeping Rooney on the outside. As I am writing this though I am starting to realize that these basement halls would have to be HUGE for this story to work this way. It's also turning out to be a lot longer than I wanted it to be, I am not aiming for a half hour TV show here, this is likely going to go on the back burner for a while and when it's revived it's probably going to be in the form of a series of internet shorts...so I need to make this thing move a lot faster.

I think I know how too...I'll try to fix it up tomorrow and move on because the film team I work with is more immediately interested in shooting a bunch of short film (5 mins max) and I am looking forward to tackling those.

Anyway that's my page, that counts!