Ok, let's keep rolling with this. I've been working away on this while it's slow at work...actually I shouldn't say that.

One of the recruits nervously volunteers. The zombie thrashes at him
violently as he gets close enough to let her off of her chain. 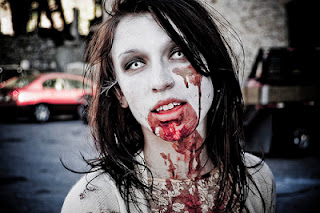 He unleashes the zombie and falls backwards as it comes for him, just as he's about to be hurt the collar wraps around her neck and she's pulled away by Ervin.

ERVIN
Thank you. As you just saw it's easiest to get your collar around them
when they're distracted which is why we always work in teams.

RECRUIT #3
What if she had bit me?

ERVIN
Then we would have had an opportunity to show how to properly treat a
zombie bite. In that case we'd need to act quickly and get you on the
anti-virus immediately. A zombie bite doesn't have to be a death
sentence, think of it like a rattlesnake bite...if we can get to you
quickly enough we can save you.

CREEPY RECRUIT
So is she going to be cured?

ERVIN
No, when it's been this long there's little chance of saving her...It's
sad. She was pretty.

The zombie thrashes about.

There's a knock on the door, one of the recruit's answers. Randall is at the door with Rooney, they're bickering.

RANDALL
Ervin I heard you have a zombie that needs to be taken back to holding.

RANDALL
Ok, I need to do an inspection first.

ERVIN
That's why you brought Rooney with you?

RANDALL
(agitated)
I didn't ask him to come with me, he insisted. He's been following me around everywhere lately.

ROONEY
Randall this is dangerous.

RANDALL
And what make you think I can't handle it?

Rooney flashes back to his vision of Randall dead and bloodied.

Ervin pulls them out into the hall.

ERVIN
We're going to take a break, go get a snack or something and meet me back here in 15 minutes.

The recruits all file out, leaving the restrained zombie in the room alone. The door opens back up and the Creepy Recruit enters alone. The zombie takes notice, he seems fixated on her. He nervously inches closer, too close.

CREEPY RECRUIT
You were pretty.

The zombie stops thrashing and stands still, the creep moves closer. He closes his eyes and inches closer and closer to her lips.