Ok, I am starting a new script now that will be about zombies. Not the undead kind.

I am thinking more about the Rage zombies from 28 Days Later. 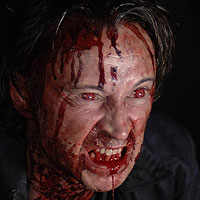 It's another episode of DOPE (going to be doing DOPE for a while), here's my summary:

'Ervin is training a batch of new hires on how to safely interact with zombies, when he turns his back for one second it's a full blown zombie outbreak in the lower levels of the Department of Paranormal Events.'

Or something like that, I'll probably end up re-wording it later.

A female zombie is chained to a desk, shestumbles forward; hungry for flesh but is stopped by the chain.Her face still has smears of blood and make-up on it.

Thecamera pans back to reveal a classroom of D.O.P.E recruits sitting onthe floor, Ervin is at the front of the class teaching.
ERVIN
Thekey to handling zombies is not to panic, remember that only in largenumbers should they ever be a real threat. As I am aboutto demonstrate as long as you keep your distance and use theproper tools; you should have no problems subduing yourzombies.

ERVIN
Incorrect, there are two subspecies of zombie.Rage zombies and the living-dead zombies. Rage zombies are livingpeople who’s minds have been infected by a violent neurotoxin.They are faster than dead zombies and often times more dangerous.It’s policy that since rage virus’s are at time’s treatable;we’re to treat all zombies as though they’re living untilinspection can reveal otherwise. This woman is believed to be avictim of the rage virus, notice the slightly pinkish hue of her skinand lack of visible injury…these are signs of life.
This womanis still alive.

ERVIN
Theyhave brains but their brains are fixated on one thing, violence. The only thing she wants to do is tear everyone in this room apart and eat all of our insides.
Ervinpicks up a pole with a collar on it much like a dog catcher’spole.
ERVIN
Ok,I need a volunteer to unchain her.