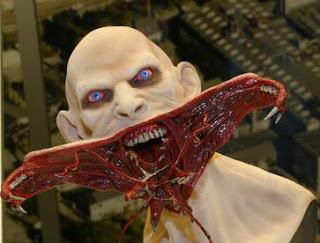 EXT – Outside the cabin window.

Randall is being dragged away from the cabin by 2 vampires, they drag him a few feet and then turn on him, he kicks and claws at them in an attempt to break their grasp.

Rooney comes bounding out the window with a sharp chunk of wood in his hands. The vampires let Randall go.
ROONEY
Randall, RUN!
Randall takes off into the woods. Rooney stands his ground as they start to stalk closer to him. They're within a few feet, Rooney hunkers down ready or a fight, then looks at the small piece of wood that constitutes his only weapon and his look of confidence fade.
ROONEY
Randall wait UP!

Rooney bursts past the vampires and runs off in the direction that Randall went.

The vampires growl and hiss and close in on Ervin, Ervin removes his shirt and gets primal. 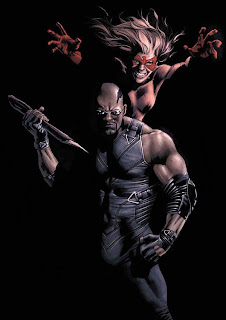 The vampires close in on him, three hang back while two of them pounce on him. He kicks one in the chest and sends it flying, the other takes him to the ground. It stands over him animalistically and shows him his fangs. Ervin shoves the lighter in it's mouth and uppercuts it, the lighter explodes inside of it's mouth; lighting on fire.

In an instant the other one is back on top of him and digs it's claws into his chest in a tight grip and pulls him close, as it bites down on his neck; Ervin screams loudly.