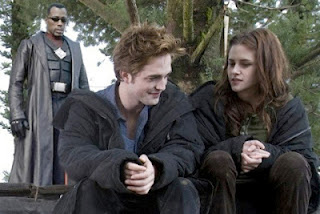 I am almost finished my first rough run on this, normally I'd go through it all once more and make final changes before anyone saw it (since no one reads this that's pretty much what I am doing anyway). I've already made changes to my script that don't appear in this blog, when I am totally finished I'll post my final first draft.

I am not too crazy about any of what I am about to post today but it's always better to just get something written even if you don't like it. It's a lot easier to revise something than it is to write it from a blank page, there's something about a blank page that saps motivation to write and stifles your thinking process. Get some black on that screen and work from there.


The second vampire springs onto Rooney and digs into him with it's claws, Rooney manages to kick it off of him and the vampire staggers backward and trips over the still prone Randall and falls over the edge of the cliff.

The two men sit for a moment and catch their breath

Voice on the Radio'Your call is being forwarded to one of our operators, please stand by.' Hello, please state your name and the nature of your emergency. Randall This is Randall Edmonds, employee number 5846541-1 I have a government employee in danger and I need assistance immediately. Listen carefully, I need you to access vehicle registration number G5EDD43 and do a manual override. I want you to set off it's alarm system for me. NOW. Voice on the Radio One moment. I see this vehicle was signed out by Rooney Rodman, I will have to fill out a 'failure of care' form which I will need him to sign, a 'failure of care' report will remain on record for 6 months. Randall
Sorry to add to your file Rooney

The sound of an alarm screams, the two sit up quickly. The car is close by. INT - CABIN

Ervin is in a deadly fight with the remaining 5 vampires, he's not doing well. The vampires surround him, he's badly hurt but still swinging. The blood that's pouring out of him is driving the vampires into a frenzy like a pack of hungry sharks, they fight over him which allows him a moment's distraction. He readies his piece of shattered wood behind his back. The largest vampire wins the battle of dominance and the right to eat Ervin, Ervin is on his knees and has almost nothing left, the vampire grabs him by the throat and gets nose to nose with him. He senses Ervin is resigned to his fate and goes in for the kill. Ervin grabs the vamps by the back of the head and pulls him closer, in one swift motion he plunges the stake upwards into the vampire's chest. It lets out an agonized howl and explodes. Ervin falls back, the other vampires are excited and all move on him. The room lights up, the vampires cringe. It's not the sun, it's headlights from a car. The headlights illuminate the two figures standing in front, silhouetted from the light. They're strapped from head to toe, literally covered in guns and weaponry. Ervin raises his head with the last of his energy, and looks up at them. The guns charge up with a high pitched hum.

He blasts one which explodes and covers the walls in bright red gore, then does the same with the others.