Been working on a movie script, it's my first one. One page at a time I am getting it done.
I collect it all here as I go: 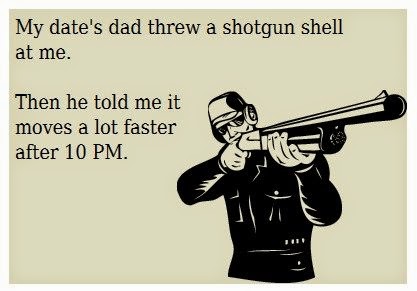 Douglas and Grant are in a daze after the collision, when they finally come to they're faced with a shotgun and an ultimatum.

RICHARD
Turn around. Never come back.

RICHARD
If you ever come near my daughter again I'll kill you. I swear to god. You're done around here. Leave.

RICHARD
That's why I am here. She told me all about you; you piece of shit.

RICHARD
You get him out of here. You get him away from my daughter or I'll shoot you both.

GRANT
Douglas we have to go.

DOUGLAS
NO! Richard listen to me, Abigail did this. She did all of this. She needs a doctor.


Douglas feels dizzy from the collision, things around him slow down and fall silent. He doesn't hear Richard and Grant shouting at each other. His eyes are moving towards the house, he see Abby looking out the window. He snaps out of it.

Douglas stumbles out of the car and attempt to walk to house.

RICHARD
GET BACK IN YOUR CAR!

Douglas ignores him. Richard responds by belting Douglas across the face with the butt of his gun. Douglas falls to the ground at Richard's feet.

RICHARD
What were you doing with my daughter? What kind of game were you playing?

Blood spews from Douglas's mouth, Grant runs over and tries to pick him up.

Grant helps Douglas to his feet, Douglas locks eyes with Richard and his shotgun.

RICHARD
I knew you were no good.

Douglas has had enough, he charges Richard and takes him off his feet. The two wrestle around and the shotgun goes off, no one is hit but everyone is startled. The fighting doesn't stop, the gun goes off again. This time too close to Grant.

Grant pulls Douglas off of Richard, Richard responds by pointing his gun at Douglas's head. Everyone can see in Richards eyes that he's going to pull the trigger. Douglas braces.

Abigail runs over crying, as much as she's afraid of Douglas she still loves him. He's madly in love with her still.

ABIGAIL
Grant, get him out of here.


Douglas sits bloodies on his knees, he's trying his hardest to hold everything together.

DOUGLAS
Abigail, I am not leaving you!

ABIGAIL
I am scared of you.


That hurt him more that the car crash or getting gun butted on the nose.

Grant picks his friend up and gets him into the passenger side of their car. As they peel out the back bumper falls out, broken glass sprinkles the road behind them as they drive away. Douglas' eyes are glued to Abigail as they pull away, she's crying in her father's arms. Douglas' eyes close.