This story goes all the way back to when I was in grade 2. I am not sure how old that would make me but 6 feels about right, I was a tiny kid, chubby face, happy, unkempt hair, real pick-on-able. The kind of kid that this jackass we called Tommy Toomey loved to target. Tommey Toomey was our class's bully, he was several grades older than us and not very popular amongst kids his own age. He spent his recesses chasing down little kids ten times smaller than him like a goddamn Tyrannosaurus, and he got his nickname from a movie about kids who can jump into a stamps and be transported to wherever the stamp was from and unless I am mistaken; to whatever time the picture on the stamp was taken. It was called 'Tommy Tricker and the Stamp Traveler' and as I look that up just now for the first time in about two decades am smacked in the face with the fact that I am totally remembering his name wrong. Was it Tommy Tricker that we called him? It must have been. Ok, so anyway Tommy Tricker the little a**hole liked to beat me up.

One day I found myself in the boys washroom, happily alone and having a pee. I finished up and because even back then I knew it was gross not to; I washed my hands and dried up. Before I could leave; the door opened and I heard the stupid voice of Tommy Tricker coming in, I had enough time to run back and give myself space before he saw me but not enough to hide. When Tricker saw me his eyes lit up. Not long before he was on top of my friend Mark, beating him up. I ran to the rescue and pushed him off, I grabbed Mark and we ran. He screamed threats of revenge and now he had me cornered in the washroom. He stomped towards me, telling me how dead I was and peppering me with insults. I knew this was serious. As I was backing up a plan formed in my mind.

The doors to the stalls swing outward, if I could lure him into place I could grab a hold of the door and shotgun it into his face. I was 6, remember that. I backed up, baiting in Tommy by asking for mercy, and begging him to leave me alone. That's like catnip to a bully, he kept coming. I SPECIFICALLY remember plotting out a plan that involved not looking at the door as I backed up, waiting for it to cross my peripheral vision before I made my move for fear of giving myself away and spoiling my one and only chance to escape.

Finally Tommy stepped into place, without turning my head I reached for the door. I played my part perfectly, Tommy had no chance to react. The door hit that kid so hard it knocked him right off his feet, I annihilated him. I ran. As I sprung forward the heap on the floor that used to be Tommy Tricker started screaming death threats at me. I could still hear them as I rounded the corner into my classroom to safety. I was 6!


"Young Ralph James and his scheming friend Tommy Tricker collect stamps. But when Tommy snatches a rare stamp, Ralph discovers the secret of stamp travel to take him around the world and bring back the 75-year gone traveller Charles Merriweather."
That...that was a real movie someone made.

Here's my page for today, it's the next scene for my horror script which I am patching together.

The next morning's light fills the boat's small living space from above, amongst the mess all over the floor it's hard to see Darcy hidden in a darkened corner. She hasn't slept a wink, she's a nervous wreck. She's holding a knife close in hand. The sun comes right through her window and hits her in the face, the bright white light prompts her to move. She make her way above deck.

It's a nice day, there's a strong wind causing waves to bounce off her boat and rock it, she makes her way to the bow. It's covered in a black slime, there are deep scratches all over the boat. Darcy takes the time to scan the boat for supplies, she has plenty of food to last her a while, all sorts of tools, fishing equipment, first aid kits and a flare gun. Cade made she to be well stocked, he took good care of her. She tries the radio again and again but gets nothing but static and silence.

The wind slams the sail behind her, the sail is still down but the wind is strong enough to slam the jib against the taut rope tying it down. Darcy knows she can't waste this chance, the wind is strong and this gives her an opportunity to get moving. She has no training but can gather that the first thing she needs to do is to untie the ropes holding the rig in place so that she can begin to raise the sail. It's not easy for her but she figures out how to get everything lose and untied. One it's loose she runs over to the rope and starts to raise the sails slowly, she gets a quarter of the way up before the wind catches the sail, slamming the whole rig back and forth.

Darcy rushes to solve the problem before the violent slamming causes the sail to break apart, something is loose that's supposed to hold the jib in place but she can't get a hold of it. The sails swings around and collides with her, sending her flying in into the water.

Darcy hits the water and sinks slowly before she comes to seconds later, the blow rattled her. The water is frothing and hard to see in, beneath her is dark blue water giving way to blackness and all around her is blue. Darcy sees her boat and swims towards it, but doesn't seem to be getting any closer. She surfaces to see the boat moving away from her, though to sail isn't up the wind and movement of the water are carrying her boat, her only lifeline away from her. Darcy races forward, swimming after the boat as it quickly drifts away, the look on her face is one of terror. The boat is always just out of reach, she's wondering how long she can keep going.

As she races forward she sees something out of the side of her eye. Something moving even faster than her, it's coming upward from below. It's hard to see, just a shadow but she can definitely see that its something moving towards her. She screams underwater and pushes herself ever harder, the boat is once again JUST out of reach and the shadowy figure is getting closer, it's big. She reaches forward with all of her might and grabs hold of a lose rigging hanging just over the side. She pulls with every last ounce of strength she has and flings her exhausted body over the side. She leans over the side staring into the water, and sees a figure shoot past the boat. The way it moves is foreign to her, the creature has long fins, sharp edges; a violent look to it. It startles her and she falls back, she's too exhausted to move.

In the distance she sees a splash, a long thin fin breaks the surface. Darcy passes out. 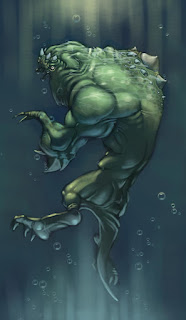