One Minute Short Script About a LOSER.

I disappeared for a while, I don't want to get into why too much but a lot of my writing time has gone towards writing resumes and cover letters (I am employed but I'd like to try something else). It really is a creativity killer. Anyway here's what I am writing now: 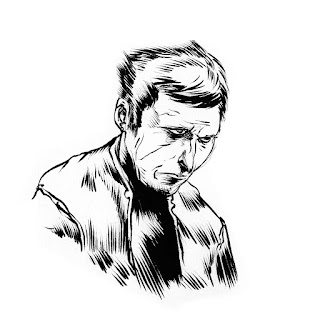 Jeff is an average man walking down an average city street, he doesn't seem to have a direction or anyplace to go and his pace dictates that he's out for a stroll; just observing the world. He seems almost nervous amongst the crowds as they pass him by and there's a distance between him and those around him, while he see others interacting with each other he seems hesitant to make and real eye contact with anyone. He's depressed. 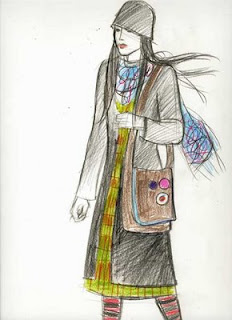 As he passes by a corner restaurant he sees a woman rush out the front door, his eyes lock to her. He's captivated by her, for a second he wants to call out to her and get her attention in some way but his introverted nature won't allow it. She's rushing anyway and he has no good reason to approach her and strike up a conversation. Deflating; he watches her walk away. As she crosses past him her glove falls out of her pocket and lands on the ground, she doesn't notice. She's actually quite far now, almost across the street. Jeff looks at the glove, normally he would just call out that she dropped something but she's so far away. In order to return her glove would take a big gesture, he'd have to pick it up chase after her and shout her down to get her to stop and turn around. For Jeff that's not something that comes easily. He wants to, he sees the glove and the woman but his nature is still holding him back. He's trying to talk himself into it, there isn't much time left. Jeff in a moment of breakthrough steps outside of himself and steps towards the glove sitting on the street. He's excited. He's really going to go for it for the very first time, he's nervous as he steps towards it and begins to reach for it. He's startled back by the sudden appearance of someone else, some man. The man noticed the dropped glove and came running out of the restaurant after the woman, he strides confidently as he scoops up the glove off the concrete. The man runs across the street with a smile and shouts to this beautiful stranger, displaying the kind of confidence that Jeff can only wish for. She turns to him, Jeff can't hear what they say but her embarrassed smile says more than enough. They laugh, he makes her laugh, Jeff watches. She touches his arm, they laugh, Jeff watches. They walk away down the street together, Jeff watches. Jeff puts his hands back in his pockets, he looks around at the people outside; no one gives any indication that they notice him. Jeff walks away, head down.
Posted by Unknown at 8:33 PM