I HAVE A RECURRING DAYDREAM

I have recurring daydreams. I find myself daydreaming all the time, I have several favorites that I like to visit and I decided to try to bring one of those characters to the surface. I've always liked the idea of a brutal killer, a tortured wreck and a punisher who has an unbelievable affection towards victims. He's not a good person but he connects at times with the scared and hopeless who have no one protecting them from bullies. He hates bullies, he bullies them and as far as he's concerned he's the only one allowed to be a bully because he's the best at it anyway. I don't want to blurt out too much about him, I am just going to try writing him. Just force him out of my head on onto this blog. Here's Cockroach. He'll look cooler if someone who can actually draw took a crack at him. Anyone? It would really help me out. 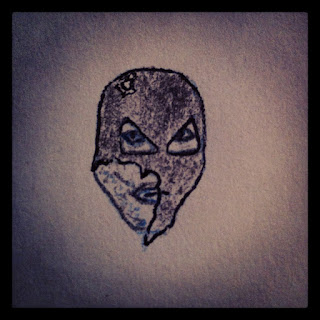 A man in a torn up and tattered black ski mask is lying on the floor staring into the eyes of a woman who is in the last moments of her life. She's trying to speak, she looks sad and is trying to speak her last words. The man speaks.


"Then you know you don't have to worry about those men anymore."


"That goes away soon. I want you to close your eyes"


She whimpers no, she's scared and her eyes are getting glassy.


"I am sorry I didn't get here sooner. Sometimes bad things have to happen first for me to find the bad guys"


"It doesn't hurt now does it? Good Sweety. You'll like this part, everything slows down now, you can step outside yourself. It feels like the first time you've ever really been conscious. You're seeing the people you love aren't you? "


She starts to finally fade.


"I promise I'll torture those men for you"


She smiles. She dies. 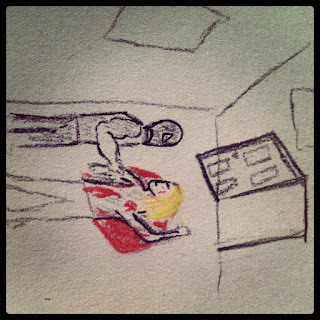